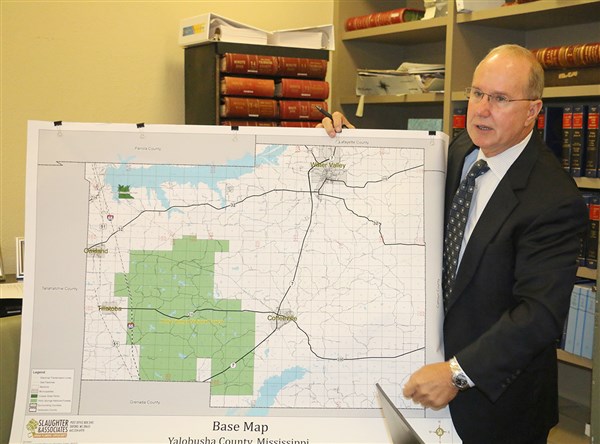 Mike Slaughter explained the benefits of implementing a comprehensive plan for the county at a supervisor meeting last July. – Photo by David Howell

WATER VALLEY – Supervisors continue to discuss implementing a land use ordinance in the county that could address blight and minimum subdivision development regulations following a second round of discussions on the topic during the Feb. 6 meeting.

The matter surfaced last month after county officials learned of a potential trailer park expansion in Water Valley that could straddle both city and county property. The issue became contentious during a lengthy public input session at the Jan. 23 supervisor meeting.

After that meeting Board President Cayce Washington explained that he had reached out to Slaughter and Associates, an urban planning firm based in Oxford, along with Board Attorney John Crow and District 3 Supervisor Lee McMinn to discuss available options.

Washington shared information he had learned about the issue as well as public input.

“Most counties do not have any kind of planned growth model and they don’t have a lot of zoning and ordinances. And I think the general consensus, the take-away that I have gotten from a lot of people is that we really don’t care about zoning and ordinances,” Washington explained at last week’s meeting. “But at the same time we don’t want to get caught with in a bad situation in the future. I don’t think we need to get into a situation where we dictate to people how tall to cut their grass and what they can and can’t put in their yard but at the same time we want to maintain some type of planning for the future.”

McMinn presented pictures of several eyesores in the county to help illustrate the problem.

“I am thinking in terms for future development and for protection of current homeowners. We have people who try to do the right thing with their property and then somebody comes in and does whatever they want to do. It affects property values,” McMinn told the group.  “There needs to be a remedy for that neighbor or neighbors to have an option to make somebody do right and clean up their place.”

McMinn also cited several examples of previous subdivision development in the county, starting with Lake Estates off of Hwy. 32, near Oakland.

“Somebody went in decades ago and put in a subdivision with 10-feet wide roads,” McMinn explained. He noted that the property values and quality of life have been negatively affected in the subdivision because of the problematic roads that aren’t maintained and will not accommodate a garbage truck, fire truck or ambulance.

Citing another subdivision, Kathy’s Cove, McMinn said the developer put in 20 feet-wide roads that were up to standard.

“There was no ordinances on the book saying how he had to do it, but he did it right,” McMinn said. “But it is exactly what you would want him to do if we had an ordinance on the books.”

“I am not saying they would have to have curbs and gutters, but I would like to have minimum subdivision stands,” he added.

McMinn also stressed that enforcement would be essential if the county adopted an ordinance regulating land use.

Booker explained he had been recently approached by a constituent asking if the county could do something about a neighbor with multiple abandoned vehicles on their property.

“I told her that we are working on it,” Booker explained.

Yet another issue discussed was a junkyard that has opened in the county on Hwy. 51, just south of the Panola-Yalobusha county line,” also in Booker’s district.

“People are complaining about that too,” Booker said.

“That is a perfect example, how would you like to own some land right there. Your values plummet,” McMinn added.

“We have the state statute, don’t we John? If it constitutes a blight, the county can go in and clean it up and charge the landowner?” District 5 Supervisor Gaylon Gray asked Board Attorney John Crow.

“If it is a health and safety issue, you can clean it up on your own motion or on a petition of the people in the area,” Crow answered. “The city has done that, not very often, but they have.”

Crow advised supervisors to hire a consultant if they decide to move forward with some type of property restrictions in the county.

“If you are going to be looking at residential, manufactured mobile home covenants, you need somebody who knows what to put in there,” Crow explained.  I’m not educated on that subject, you better know what you are doing when you restrict use of property and have somebody who can say this is why we did it. You are going to have to spend some money to do this.”

Options discussed including employing Slaughter and Associates or North Central Planning and Development District to help the county implement a comprehensive plan that would include land use regulations.

“Do we want to entertain bringing on this Slaughter guy, or do we want to talk to North Central?” Washington asked, adding that the cost of Slaughter’s services had increased from the $25,000 quote he gave the county last July to $32,500.

“I think it would be prudent to talk to North Central,” McMinn answered, as the matter was tabled until a recessed meeting scheduled Friday, Feb. 17, at the Water Valley courthouse.