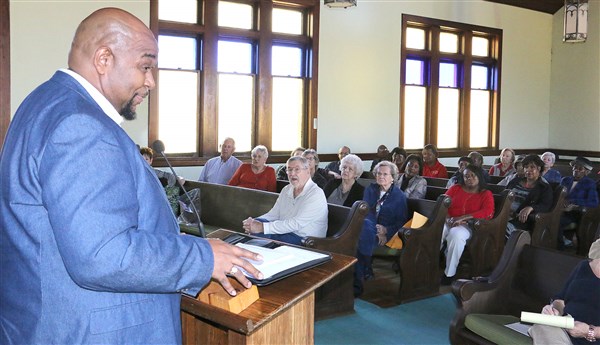 Calvin Hawkins has worked two years gathering research for a book he plans to publish on African American history in Water Valley from 1870 to 1970. Hawkins shared some of his information during last Thursday’s Yalobusha Historical Society meeting in Coffeeville.

Hawkins told YHS attendees that he plans to publish the book, “Under the Dusty Stand,” next February in connection with the annual celebration of Black History Month. His area of interest is black history spanning 100 years, from 1870 to 1970, in Water Valley, but he also explained the research includes stories from the entire county.

Hawkins said his search started at the local railroad museum and library, but he soon discovered information was limited. He was more successful in uncovering information at the courthouse and newspaper, but the real work included approaching different people in the community to see what they may have tucked away.

“I had to go into the homes, because I knew somebody had pictures or other information.” Hawkins told the group. “They may have it packed up in the attic or in the basement and it probably had dust on it,” he added. Hence the name of his book “Under the Dusty Stand.”

Among facts shared at the meeting was Green Goshen was the first African American Church in the county, established in Water Valley in 1865.

Other interesting information shared by Hawkins during the meeting was excerpts from a 1937 interview with former slave Dempsey Pitts of Coffeeville. The interview was included in the Mississippi Slave Narratives, and recorded as part of the Works Project Administration (WPA) to record the life stories of more than 10,000 men and women from a variety of regions, occupations and ethnic groups.

Pitts was 107 years old when he was interviewed. He was the first black preacher in Coffeeville and organized the first colored church in the town. His interview provided insight on worship for African Americans before slavery was abolished.

“We all attended the white folks Methodist Church. At eleven o’clock they had service for the whites. After they left, our sermon started. First the preacher read out of the Bible. Then he say, ‘You must be obedient to your Master and Misties. If you don’t take their chickens, and don’t steal nothing, you will have rest, when you die.’ They all said that same thing, ‘cept one man, a preacher, whose name was Sawyer. When he gave his sermon, he told the colored folks they was all going to be set free. The white folks sure got after that man, about that sermon. He say he didn’t care, he going to preach the Bible. Lord! I never ‘spected to see the day that them words of his come true,” Pitts said during the interview.

Hawkins said he is still searching for the name of the church founded by Pitts and welcomes input from the public on this or other history in the community. In addition to churches, Hawkins’ research also centers on former colored schools, which he said numbered 15 in Water Valley alone. Many of the schools were located inside churches in the community.

Hawkins aso said his research indicates there was little trouble between blacks and whites in the community.

“That is a blessing, it’s a blessing to know that we were built on a solid foundation here in Yalobusha County,” Hawkins added.

Those attending the meeting, held at the YHS headquarters in the former Presbyterian Church in Coffeeville included: