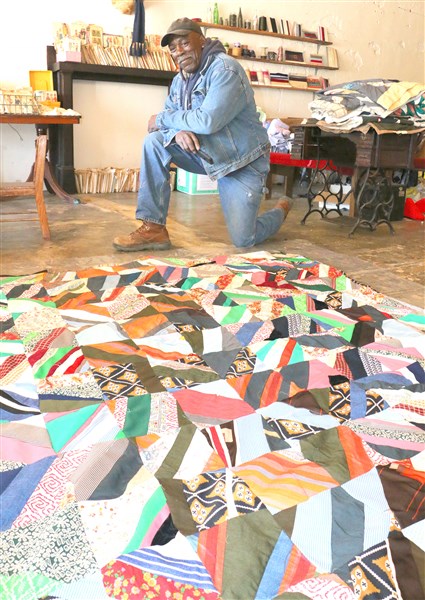 David Buford gets a final look at one of his grandmother’s quilts before they are shipped to the National Museum of African-American Heritage and Culture in Washington D.C.

WATER VALLEY – A collection of quilts that help tell the story of local African American history is headed to the Smithsonian in Washington D.C. for the world to enjoy.

Last Thursday a packing company stopped on Main Street at Yalorun Textiles to carefully package 10 quilts made by the late Ethel Lea Benson. Her 1800s treadle sewing machine and family memorabilia were also shipped to the National Museum of African-American Heritage and Culture in Washington D.C. to be included in the exhibit.

The museum opened last September and is the only national museum devoted exclusively to the documentation of African American life, history and culture and was established by an Act of Congress in 2003, following decades of efforts to promote and highlight the contributions of African Americans.

The quilts first attracted attention over a year ago when Benson’s grandson, David Buford, a Water Vallian and owner of Diamond Concrete, visited Coulter Fussell at Yalorun Textiles to see if his favorite quilt from his grandmother’s collection could be repaired.

For Fussell, the impact was immediate when Buford showed her the collection of quilts his grandmother left him.

“What I find great about these quilts is what a lot of people find great about quilts made in this style, they were made out of necessity. And because of the history behind them, they are beautiful,” Fussell explained.

Buford has 14 quilts his grandmother made over the course of her lifetime that spanned almost nine decades when she passed away in 2013 at 89.  Among the most striking ones are five quilts made from Buford’s grandfather, Leroy Benson’s work clothes – denims that were sun bleached and marked with worn patches secured through tiny hand-stitches.  Benson’s quilt work later transitioned to polyester clothing material, which was common in the 1960s and 70s.

“During that show, people came from across the nation to see the quilts,” Buford told the Herald last week as the quilts were loaded.

Following that show, Fussell reported a series of lucky breaks, good timing and Buford’s devotion to the collection attracted the Smithsonian.  Ten of the 14 quilts will be included in the exhibit at National Museum of African-American Heritage and Culture.

“The quilts were made for survival,” Buford explained in a letter he wrote to a curator. “She took my grandfather’s worn out denim overalls for bedding, because our house at the time was drafty during the winter months. She developed a passion for making them, and then she became more creative and started designing quilts with different designs using various materials and patterns… They are made out of the sweat and toil and hardship of a north Mississippi family and not much evidence of that kind of life remains,” he wrote.

Buford also provided proof through photos, which depicted his grandmother as a seamstress and sharecropper.  He provided documentation where she sold eggs and other food to make a living, along with picking cotton.

Buford was raised at Hawkin’s Crossing by his grandparents and fondly remembers his grandmother working at the sewing machine.

“She was a good lady, she raised me from three months old,” Buford recalls. “She taught me everything, I was cooking Christmas dinners at 10 years-old.”

Buford said it will be at least six months before the exhibit is up and going. He also speculated on his grandmother’s reaction if she was still living.

“I know she would have a few choice words, but she would be happy. She would say, where are you sending my quilts, I don’t know anything about that place,” Buford added.