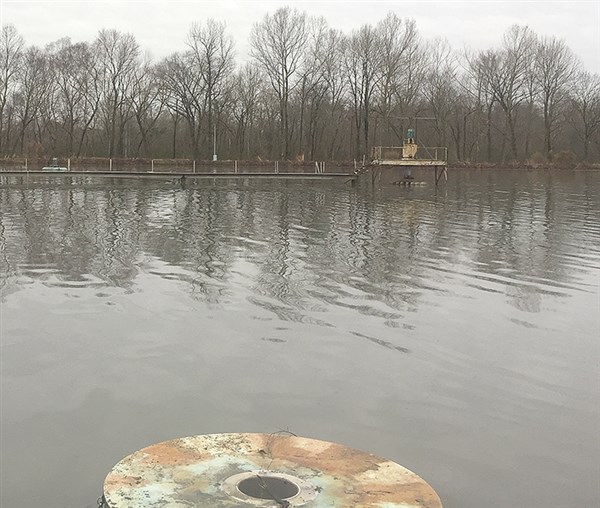 The wastewater from Water Valley Poultry, LLC, flows from the plant straight into a cell at the wastewater treatment plant, where it is pre-treated before it is released into the city portion of the lagoon.

WATER VALLEY – An ongoing problem at the City of Water Valley’s wastewater treatment plant is under investigation by the Mississippi Department of Environmental Quality (MDEQ).


MDEQ Enforcement /Compliance Division Chief Chris Sanders reported Tuesday that his agency is working jointly with the City of Water Valley and Water Valley Poultry, LLC, to identify the source of an odor problem. Sanders added that his agency has received complaints from the public about the issue. He also cited wastewater samples taken from the poultry plant were problematic.


“Some are above permit levels,” Sanders said about the samples, which detect the level of processing waste in the plant’s discharge.  “We want to get to the bottom of this. If everything is working optimally, you would not create conditions where the normal person would consider this a nuisance,” Sanders explained.


Sanders also said MDEQ has taken enforcement actions against the plant in the past, but not related to the odor issue.


“There are some questions right now as to what is causing the odors. The city, MDEQ and poultry plant will have to look at this to see why we are getting the objectionable odor,” Sanders continued. “We all have a part to play. We just don’t seem to be making the progress we expect. We are going to have to make it a priority for the plant and the city to get to the bottom of this issue,” Sanders added.


Sanders also explained MDEQ officials visited both the city and poultry plant within the last week. The MDEQ visit follows months of a strong odor intermittently coming from the lagoon that is often detectable for several miles, depending on the wind direction.


Last month Water Valley Mayor Larry Hart told the Herald that part of the odor problem at the lagoon stemmed from the lack of operating aerators at the lagoon cell dedicated to treat the plant’s wastewater. Hart explained that only one aerator out of five was operating for a period of several weeks and the poultry plant is responsible for maintaining the aerators.


Speaking Monday, Hart explained there are now four aerators running and work continues to get a fifth aerator operable at the cell. He also confirmed MDEQ officials visited the plant and wastewater lagoon on Feb. 21.


“The situation is on the mend, the plant is still in the process of making corrections to their situation,” Hart said. He also noted that the city hired Morris Surrette, the city’s former water and sewage department manager, to monitor and oversee the wastewater coming from the poultry plant. Surrette retired last April.


“DEQ was at the plant last Tuesday in force, several of them checked the situation at the plant as well as the lagoon site,” Hart told the Herald.


The mayor also explained that the poultry plant subleases a portion of the city lagoon, described as a cell, from the City of Water Valley, who leases the property for the entire treatment plant from the U.S. Corps of Engineers. The poultry plant is responsible for pre-treating the wastewater at the cell before it is released into the city-portion of the lagoon for final treatment and ultimately discharged into Otuckolofa Creek.


Water Valley Poultry is also required to pre-treat their wastewater before it leaves the plant site and enters the cell at the lagoon, which is also part of the problem according to Hart.  The plant utilizes an onsite water treatment process, but sometimes the wastewater is diverted around the process when capacity is overflowing.


Plant manager Stacy Kesler doesn’t deny that some wastewater is diverted around the onsite treatment process at the plant.  Speaking Tuesday, Kesler told the Herald that the wastewater holding tank is often inundated with runoff from rainwater that also flows into the pit used to capture the wastewater.


The plant manager said he has a new plan in the works that will utilize extra tanks to store the wastewater when capacity is overflowing, especially during peak production, which would allow the overflow wastewater to be pumped to the onsite water treatment process at a later time.

Kesler also took issue with what he described as a “so-called” contract with the city and his company regarding operation of the cell at the city’s wastewater treatment plant.

“When we originally opened the plant as Water Valley Poultry, LLC with a parent company of Global Food Innovations, Inc., we did not have a contract on the cell at the lagoon,” Kesler told the Herald.  “We asked for the contract and until just recently we were told it could not be located… there was absolutely no contract between the city and plant,” Kesler continued. “Some time in February was the first time our CEO actually put her eyes on it.”

Kesler also cited the contract problem as a factor in only having one operable aerator at the cell earlier in the year.

“We debated at that point whether we would spend money because we didn’t have a contract,” he added.  But since then, Kesler said his company had spent thousands of dollars at the lagoon cell. “We spent probably $20,000 to get the fourth aerator going.”

Kesler also raised the question about wastewater from other customers flowing into the cell.

“There is other wastewater flowing into the part of the lagoon that we are so-called responsible for. We were finding household items that were floating in it that I know are not coming from our plant,” Kesler added.

Kesler also acknowledged MDEQ’s visit, explaining agency officials came in last week to familiarize themselves with the operation. Kesler said that part of the agency’s plan is to sit down jointly with the City of Water Valley and Water Valley Poultry, LLC to discuss the issue.

“I can tell you there was no enthusiasm from the city on having this joint meeting, they proposed that they (city) talk to MDEQ first,” he added.

Kesler also said he has worked as plant manager since June, and worked in a supervisory role at the plant for a couple of years prior to taking the head job.

“We have really turned around the plant in the last six months. There are 180 people working here. We don’t want to be a nuisance to the community. We want to have a good rapport and I believe our company is a lot more on solid ground than before,” he continued.

The matter also surfaced during Monday’s Board of Supervisor meeting in Water Valley when supervisors agreed to invite Kesler to the next meeting.

Citing a visit with Kesler earlier in the year,  District 3 Supervisor McMinn reported the plant isn’t doing enough to fix the problem.

“The problem is up there, they don’t take it serious. They are holding those jobs over the city’s head. The fact that they are the (city’s) biggest water customer and a big electric customer, that’s good, I don’t want anybody to lose their job. But at the same time, I don’t know if it is a good tradeoff when your town smells like it does,” McMinn said.

Other supervisors were in agreement to place the matter on the meeting agenda on March 6 and invite the plant manager to the meeting.