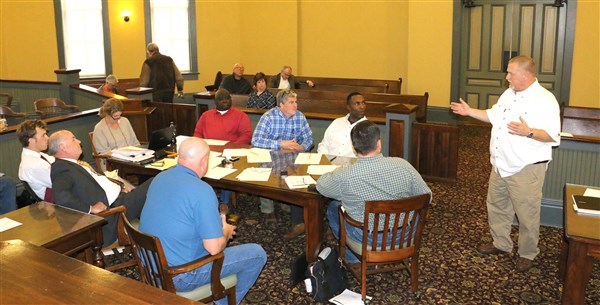 COFFEEVILLE – Responding to an invitation from county supervisors, Water Valley Poultry, LLC, plant manager Stacy Kesler outlined steps his company is taking to address an odor problem at the City of Water Valley Wastewater Treatment Plant during Monday’s county board meeting at the Coffeeville courthouse.

Kesler’s visit follows months of speculation about the cause of a strong odor intermittently coming from the sewage lagoon located in Water Valley, an odor Water Valley Poultry, LLC, has been  blamed for. Last week officials with the Mississippi Department of Environmen-tal Quality confirmed to the Herald that the agency is investigating the wastewater treatment plant.

Kesler first told county officials during Monday’s meeting that the company had a major management reconstruction two years ago.

Kesler told county officials that his company has spent a quarter-million dollars last year to upgrade their wastewater treatment system to treat the wastewater at the plant before it flows into the lagoon.

He also explained that the company has spent “quite a bit” of money maintaining the aerators at the lagoon.

“Every time these aerators would go out, we were told we were responsible for them,” Kesler explained, referring to an agreement the plant has with the City of Water Valley to maintain the equipment at the portion of the lagoon used to treat the plant’s wastewater.

Kesler also reiterated statements he made last week to the Herald, explaining Water Valley Poultry, LLC, doesn’t have a current contract with the City of Water Valley that requires the company to maintain the portion of the lagoon dedicated to treat the wastewater from the poultry plant.

“Until just recently, we had not received anything and the one we did receive does not belong to us,” Kesler continued, referring to the contract between the City of Water Valley and his company. Kesler added that his company is taking steps to maintain the equipment at the lagoon, even in absence of the contract.

Kesler’s comment brought a strong reaction from Board Attorney John Crow, who also works as the City of Water Valley’s board attorney and drafted the original contract between the city and plant.

“I can’t let this go,” Crow told Kesler. “Water Valley Poultry, Inc., has a written sublease. You say it is expired, but it is still legal though. You are still operating under that sublease,” Crow said about the agreement that spells out the poultry plant’s requirements at the wastewater treatment plant.

“It is available for anybody to see. Somebody in your company should have known, it is not the City of Water Valley’s fault. I drafted that document years and years ago,” Crow continued.

“It’s not the City of Water Valley’s fault that you people won’t maintain what you are supposed to do,” Crow continued, citing the recent lack of operating aerators that have been identified as a major culprit in the strong odor. “It reeks all down there by the hospital and ball field. It is your legal responsibility to keep down the stench,” Crow continued. He also reminded Kesler that both the city and county give the company an industrial tax exemption, saving the company thousands of dollars in exchange for the jobs provided in the community.

“I think our major concern is that the odor is being addressed, and it sounds like it is, and that it continues to be addressed so we are not having the same conversation six months down the road,” Board President Cayce Washington told Kesler.

“First and foremost, we appreciate the jobs,” District 3 Supervisor Lee McMinn added. “But at the same time, we just cannot have the smell continue. My involvement in this was only because it seemed like no one else was getting involved,” McMinn added.  He also stressed the importance of the plant and city communicating to resolve the issue.

“I know if I were in your shoes, or the City of Water Valley’s shoes, I couldn’t sleep at night knowing how the town smells,” McMinn added.

Kesler then acknowledged that he was relaying information coming from his corporate office.

“What I was being told on how it is structured, may not be correct,” Kesler told supervisors. “We are going to focus on keeping that odor down. It does bother me,” Kesler added.