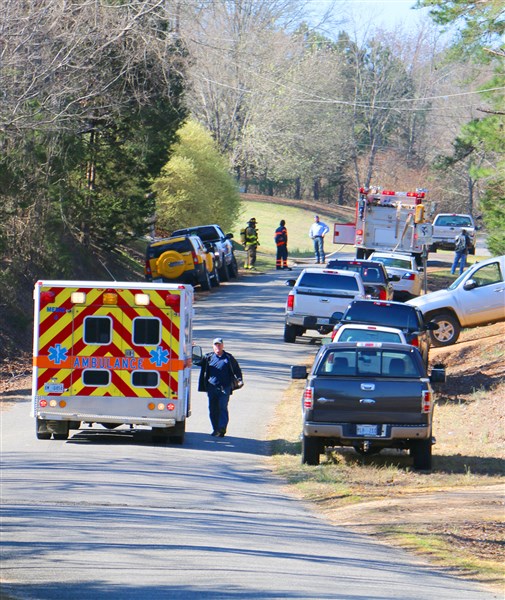 Yalobusha EMA director Frank Hyde guides the ambulance as Paul LeBlanc was transported from the fire scene to the hospital to board a waiting helicopter.

WATER VALLEY – A Yalobusha County deputy is credited for saving the life of his neighbor Friday morning after responding to a house fire. Deputy Jim Bailey was leaving his residence when he was alerted by another neighbor about smoke billowing up from a nearby house.

“I could hear it popping and cracking from my house,” Bailey reported. He jumped in his cruiser and arrived at the house within seconds and soon discovered Paul LeBlanc slumped over on the ground under his carport.

“I told him we had to move, the rafters above us were burning and I was worried his car was going to explode, it was already melting,” Bailey added. “His head, arms and hands were burned. I told him it was gonna hurt but we can’t stay here,” the deputy explained as he pulled LeBlanc to safety.

“He was able to talk, I asked him if anybody was inside the house,” Bailey added.

With EMTs and fire fighters in route, Bailey said he comforted LeBlanc as they waited for help.

“It was an extremely hot fire, I have been around a lot of fires but not anything like this,” Bailey added.

LeBlanc was airlifted to Regional One Health in Memphis, the helicopter streaking north as fire fighters continued to battle the blaze at his house.

On Tuesday, EMA Director Frank Hyde told the Herald he had talked to a family member and learned that LeBlanc was improving and expected to be released from the hospital by the weekend.

Leblanc told family members he was sleeping near the front of his house when he awoke to heavy smoke. He was able to exit the house and was attempting to extinguish the blaze under his carport to save his car when he was overwhelmed by the heat and flames.

“I feel sure it would have been a different outcome if Jim had not been in the immediate vicinity,” Hyde said.

“We had a strong response from the City of Water Valley and county volunteers last Friday,” Hyde also added about the incident. Water Valley was the first unit on the scene and Pine Valley Fire Department provided mutual aid, shuttling water as the fire fighters worked for almost an hour to extinguish the home, as volunteers from other departments also assisted.

Hyde also expressed gratitude to the dedicated firefighters who respond day and night to fires, wrecks and other incidents across the county, often leaving their jobs to help others. can’t say enough about our firefighters, our county is blessed to have them,” Hyde added.