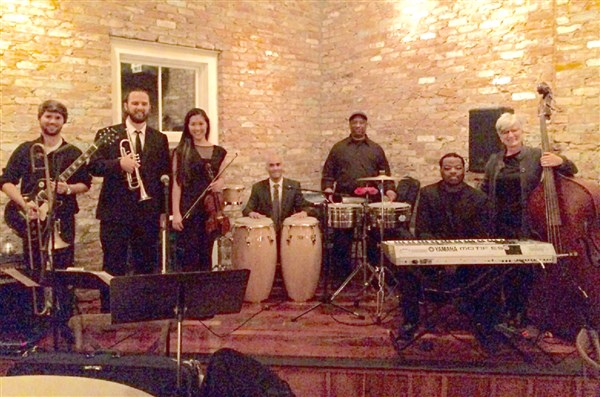 La Fusión, formed in the winter of 2016, offers a fresh perspective on Latin and world music.

Fresh from their recent performance on Thacker Mountain radio, La Fusión will perform a variety of Latin standards, mixing the power of horns with the irresistible beats of traditional percussion to make you jump from your seat.

As a special feature for this show, Foster Music & Arts will offer a free Latin dance lesson immediately prior to the show at 6 p.m.. Experienced dancers will teach all who are interested a few basic steps to help make the night even more fun.

Take the voice, guitar and congas of Andrés Diaz, the solid foundation of percussion master Ricky Burkhead and upright bassist Amy Fisher, add the energy and power of the horn section (Daniel Roebuck and Hunter McGuary), weave the piano of Lazarrus Miller through the center and top it off with the violin and additional percussion of Monique Ma and you have La Fusión. Add a dance floor and you have the recipe for a killer Latin dance party!

La Fusión, formed in the winter of 2016, offers a fresh perspective on Latin and world music. The band features the music of Puerto Rico, Argentina, Dominican Republic, Cuba, Jamaica, Brazil, Mexico (and many more countries).

From Cuban son and Colombian Guajira to Samba, Latin Jazz, Cha Cha and even Reggae, an evening with La Fusión is like a trip around the world, with a little extra emphasis on the Spanish-and Portu-guese-speaking countries.

Singer Andrés Diaz is originally from Cali, Colombia. In pre-kinder, Andrés was taught to sing, dance, and make noise with objects. Fortunately for us, he never stopped. His trio Agora with Ricky Burkhead and Amy Fisher remains one of the most enthusiastically received acts ever at the Old School Theater when they  appeared at the very first Foster Music & Arts Showcase back in October.

According to Diaz, La Fusión started as a project with Ricky Burkhead (director of percussion studies at the University of Missis-sippi) to bring Latin and World music to Oxford. With typically dry humor, Diaz says, “We wanted to bring people from seven different continents, but settled for seven different counties. Because we were already playing World Music with Amy Fisher in Agora, we simply added more instruments and selected the most orchestra-oriented pieces of our repertoire, and made La Fusión.”

In addition to Diaz and Burkhead, the band features, Monique Ma on violin, electric guitar and percussion. Ma is a singer/songwriter originally from Milwaukee, Wis., who freelances across north Mississippi.

Trumpet player, Daniel Roebuck, originally from the Mobile Bay Area is currently a musician/educator living in the Greater Memphis Area. He recently earned a Master of Music in Performance degree from the University of Mississippi.

Trombonist Hunter McGuary, from Hernando, is currently majoring in Music Education at Ole Miss. In addition to playing with La Fusión, he freelances throughout the Mid-South on trombone, guitar, euphonium, and bass.

Upright bassist Amy Fisher plays in various local bands in addition to La Fusión, including Agora, the Wilburs, the FMA All-stars, the McLeod Guyer Trio, the Yes Virginias, and the Luke Fisher Band.

The Old School Theater is located at 817 South Main Street in Water Valley.