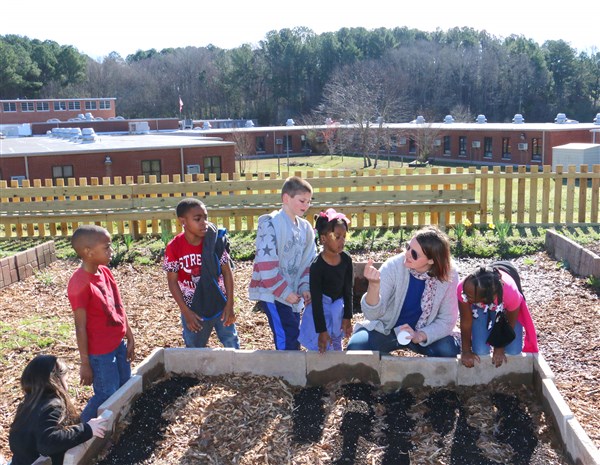 It’s planting time at the school garden, and students at Davidson Elementary School carefully drop radish and beet seeds in the garden overlooking the school. The garden is sponsored by the B.T.C. Old Fashion Grocery Store and weekly classes are taught by Alexe van Beuren.

WATER VALLEY – Students at Davidson Elementary School are getting to hone their green thumbs with a new gardening class this year.  For several hours each Thursday morning, Alexe van Beuren spends time with the students in the garden as they enjoy sowing and reaping, intermingled with lessons in science and a little fun.

The work started back in July, before school even started, as van Beuren planted a pumpkin patch to ready the garden for school in August. The dry, late fall inhibited the growth, but she reported the students enjoyed a small harvest.

“We decorated the school with them,” van Beuren explained.

As the winter months approached the fall crops included lettuce and radish, which were incorporated into a healthy lesson as the students made their own salads for a school meal. Students also planted over 300 daffodils during the fall and enjoyed seeing the first sprigs come out of the ground in February.

This month, students have been learning about soil building and how nitrogen improves the soil, an important lesson as they work to make the new garden overlooking the school a productive patch. Beuren cited numerous supporters who have helped with the project, starting with city workers who hauled mulch.

Other support includes a generous contribution from the Reedy Acres Foundation; pro bono work from B.J. Chinault, who constructed a wooden fence around the garden; and support from John and Jane Crow.

“Principal Brianna Franklin has been an enthusiastic supporter, and worked it out where every single kid in the whole school gets to come to garden class three times a year,” van Beuren added.

With spring approaching, van Beuren explained flowers and other colorful plants will be planted.

“We are going to try and attract some birds, butterflies and pollinating insects, the students love to see the colors and life in the garden as much as eating things out of the garden,” she explained.

The weekly lessons also include exercise, as the students “get their wiggles out before the learning starts, including a dance to illustrate the life cycles of plants, followed by fun verbal quizzes to measure their learning.

“The goal is to make it fun and informative,” van Beuren explained.