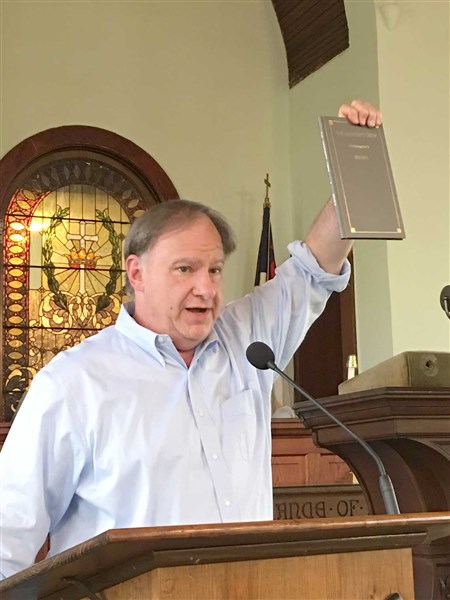 Starke Miller has invested more than 23 years researching the University Greys, a company of Ole Miss students who organized during the Civil War. He shared battle stories from the regiment during the March Yalobusha Historical Society meeting.

GETTYSBURG – J. S. Gage died before my very eyes as Starke Miller read from The University Greys written by Maud Morrow Brown to the Yalobusha County Historical Society on March 16.

“Doctor, how long have I to live?” A very few hours,” I replied.  “Doctor, I am in great agony; let me die easy, dear Doctor; I would do the same for you,” I replied, “You dear, noble fellow, I will see to it that you shall die easy”

I called for, and my hospital knapsack bearer, Jim Rowell, quickly handed me a two-ounce bottle of black drop—a concentrated solution of opium, much stronger than laudanum.

“I poured a table spoonful of it into a tin cup, with a little water, and offered it; but before his hand could reach it, a thought flashed into my mind, and withdrawing the cup, I asked, “have you no message to leave?”

“It startled him, and in a low moaning wail, he cried: “My mother, O, my darling mother, how could I have forgotten you?  Quick! I want to write.” The last line he softly repeated aloud: I dip this letter in my dying blood.”  With that he turned down the blanket and seizing the letter pressed the back of it upon his oozing, bloody wound, and handed it to me; giving his mother’s address and begging to be sure she got that letter. I handed him the cup, and he grabbed it to the last drop, returning the cup saying, “I thank you.”

Mr. Miller has invested more than 23 years of research in his topic and plans to write a book on the “University Greys,” a company of “Ole Miss” students who were organized on campus mostly through the efforts of 19 year old W. B. Lowery, who later became their captain. A number of young men from the county, who were non-students, joined later to complete the company. At Corinth on May 4, 1861, they became Co. A, 11th Regt., Vol. Inf.

Much of Mr. Miller’s research covers the personal lives of the student soldiers, as he has tirelessly located and studied letters and diaries written by the young men. His interests extend to life as he follows them from Oxford to Virginia and through some of the battles where they fought valiantly. Their participation at Gettysburg resulted in 100 percent casualties (killed, wounded, and captured). As Petersburg/Richmond fell, the remaining few of the “Greys” were captured with their backs against a swollen creek, Hatchers Run, where the Regt. was disbanded. Only one of the “Greys” was present at Lee’s surrender at Appomattox.

A copy of The University Greys by Maud Morrow Brown is in the Yalobusha Historical Library on Depot Street.