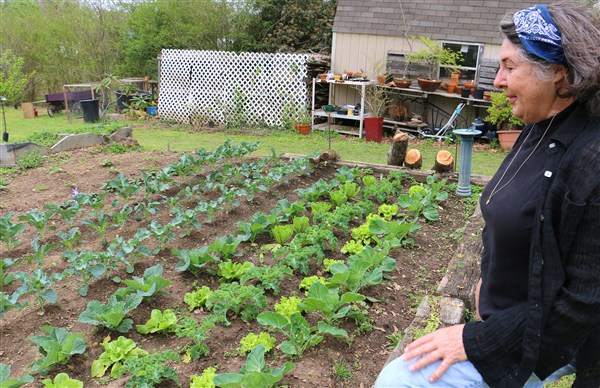 Anne Burke surveys the winter plants in her backyard garden on Blount Street. She grows a multitude of vegetables, flowers, herbs, fruit and even mushrooms in her sanctuary. – Photo by David Howell

WATER VALLEY – When Anne Burke moved to Blount Street almost eight years ago with her husband, David, she left behind three decades of hard work invested in the garden at her former home in Ocean Springs.  But she brought a vast amount of knowledge and experience and a continuing curiosity to experiment and has slowly transformed her new yard into productive soil nurturing a huge variety of vegetables, fruits, herbs and flowers.

“You can eat out of your garden 365 days a year,” Burke explains. “Do it for your health.”

Burke’s current bounty includes collards, lettuce, spinach and kale but there are countless seeds waiting their turn, some germinated and others nearing as each passing day grows longer and warmer.  Her yard is a sanctuary, even if March is a transition month. The rooster is crowing, the butterflies are floating, birds are chirping and even a few bees are buzzing around the early blooms. Bamboo and privet hedge line the sides of the sanctuary, serving as a buffer and as wildlife habitat, with more formal Leland Cypress trees lining the outside perimeter of the front yard.

“If you put a little bit of gardening in your life, you are bringing back things that the next generation is going to need. I am always looking at leaving something, even if it is just knowledge,” Burke reported about her longtime endeavor. Giving back also has more immediate benefits for friends and neighbors as Burke germinates hundreds of seeds to give away, offers flower cuttings to help with decorations for various occasions and shares the surplus vegetables, herbs and fruits.

“I tried to sell vegetables one time and I felt so damn guilty, I don’t do that anymore,” Burke explained about her desire to share. But most important is her knowledge, advice readily shared to help make gardening easy. Topping her list is to always trust your own instincts.

“People are so quick to tell you what won’t work and what won’t grow,” she notes. One example is tomatoes, currently available at every feed and seed store. But when to plant fuels endless speculation about the best timing to get an early crop while avoiding a late freeze.

Burke’s advice is to go ahead and plant when you are ready.

“If we don’t have another freeze you are four weeks ahead of the game. If we do have a freeze, you are out a couple of bucks,” she explains.

To learn what plants like the shade or sunshine, Burke has another easy idea.

“The easiest way to do that is to buy two and put one in the sun and one in the shade,” she adds.

Burke doesn’t use pesticides in her garden either, and has a backup plan if the squash bugs consume her crop.

“Go to the farmer’s market and buy some squash,” she reports.

Soil preparation is also essential for proper growth, preparation that is very similar to child rearing.

“It’s like raising  kids, if you don’t give them that really good foundation, then they are constantly reacting to life,”Burke explains.  She often buys pre-mixed fertilizer to make soil preparation easy, and cites several examples including bat or sea gull guano and kelp. She also uses chicken litter from her own backyard birds.

Among her favorite flowers are roses, and maybe that is because they would not grow in the garden at her former residence on the coast.

“You always prepare a hole three times the size of the root ball,” Burke explains, a procedure that gives the roots room to expand in hard clay soil.

The years are likely a significant factor for Burke’s outlook on gardening.

“There was one year, I call it the year of insanity, when all I wanted was heirloom tomatoes,” Burke jokes. The crop wasn’t successful but the lesson lasted.

“I only know one guy here in town, his name is Claude Hayles, he can grow any kind of tomato, and he’s really good at it,” she added. “There are people who specialize, but I am interested in to many different things,” Burke continues.  “I shotgun things, it’s a garden where I can go in the summer and pick beans, corn and okra, seasoned with pepper.

“I am also getting to the age where if it doesn’t want to live outside in the winter, it can go somewhere else,” she jokes about the plants. For the heavy lifting, Jacob Swinkowski comes over each Saturday morning to help. He earns an hourly wage and scores a cooking lesson from Burke, who also has a reputation as a fine cook.

In addition to not using pesticides, herbicides are also not allowed in Burke’s garden.

“I quit using pesticides and herbicides decades ago when so many children on our street became interested in gardening. That pesticide will stay in your liver for a very long time,” she explained.

She is also suspicious of GMO seeds.

“I don’t know what they are going to find out about that. By the time you really know if it is dangerous or not, you have ingested a couple tons of it,” Burke explained. Her advice is to buy non GMO seeds, and save them each year.

Food, beauty and tranquility aside, the garden, affectionately know as Seladore, is Burke’s sanctuary – the place where she spends time enjoying nature and sees her Creator at work. “Whatever is in this yard, it is there because God allowed it. I know it is not popular to believe that God is such a tremendous part of your life, it’s easier to think we did all of this on our own,” Burke notes. And the steps – soil preparation, tilling and planting, germination, bearing fruit – all of the steps directly correlate to the eternal life God offers.

“There is so much in gardening that makes God tangible,” Burke explains about her passion.