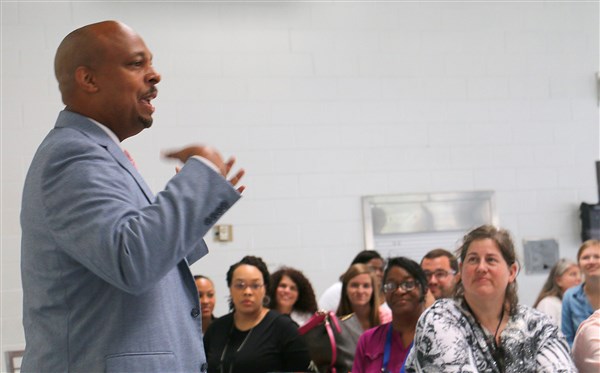 Ezzard Beane addressed the faculty at Davidson Elementary after school last Thursday. Beane was hired as the school’s new principal and will start with the 2017-18 school year.

WATER VALLEY – “I am excited about coming here and being part of the community,” Ezzard Beane told Davidson Elementary School (DES) teachers and faculty during an introductory meeting last Thursday. Beane was hired last week and will assume duties as the new DES principal when the 2017-18 school year kicks off in July. He explained  the move builds on his desire to work with children and make a difference in their lives.

Beane said his time as principal at Claudine Brown Elementary will likely parallel some of the challenges he will face at DES.

“It is a small school in the Delta, some of the challenges will be the same,” he explained.

Speaking after Thursday’s meeting, Beane also provided details of his background, starting with a stint in the Navy where he followed in the footsteps of his father and both grandfathers as military men.  He grew up in Roanoke, Va., and later moved with his family to Oklahoma and then Mississippi, where he graduated from high school in Greenville.

While serving in the Navy he said his plans were to work in engineering.

His first job was in Leflore County Elementary School where he taught special education. He also worked as a math teacher and to help pursue his passion, he earned a master’s degree in literacy to help give his students the best education possible.

“If they can’t read, they won’t be able to read their math problems, that is why I focus on reading and make sure we produce students that are literate,” Beane explained.

Beane also shared that one of his first impressions of the school and the community came last year when Kagan Coughlin visited Grenada High School to recruit students for Base Camp Coding Academy’s inaugural class.

“Kagan spoke very highly of the community, he loved the small town feel and said it was the perfect community to raise your children,” Beane explained.  He also visited the community during spring break with his family to get a feel of the town and people.

Beane added that the decision to return to work in an elementary school setting allows an opportunity to impact students’ lives before they get to high school.

“We are excited, we are going to see some great things,” Superintendent Dr. Michael McInnis added about Beane joining the team at DES. “We really wanted to get the right candidate, we did some recruiting. And I can tell you that Mr. Beane put a lot of thought in this, it was not an overnight decision.” McInnis also said.

“The first thing is to get to know the community and build the trust. We will try to always do what’s right and what’s in the best interest of the school, the children and the teachers. I want parents to know I am going to do what’s right,” Beane told the Herald.