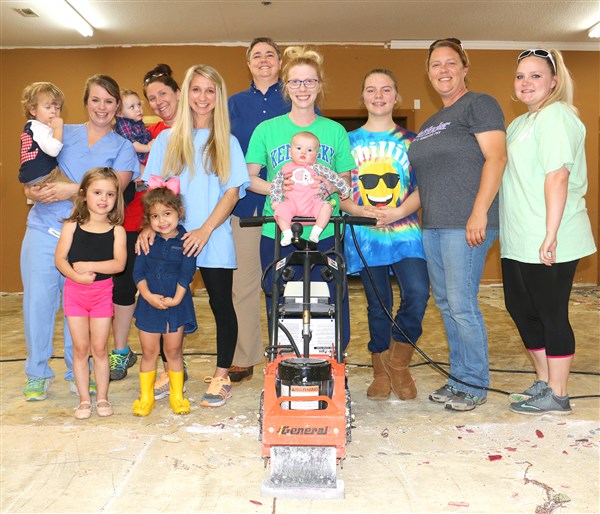 WATER VALLEY – The hard-working volunteers at Second Chance Animal Alliance (SCAA) have added more work to their busy schedule with the renovation of a new animal shelter. The organization purchased property on Hwy. 315 just outside of Water Valley that includes two structures, one damaged by fire, and have already started the interior demolition as the buildings will be converted to animal shelters that will be compliant with HSUS (The Humane Society of the United States) standards.

It’s an arduous task as the volunteers already juggle the duties that come with animal care along with the never-ending animal crises that surface.

“And this is all while we are holding down jobs, spouses, kids and life,” SCAA President Melissa Smith explained.

The evidence is a tile ripper, rented from Home Depot, sitting unused in the middle of a half-ripped up floor for over a week.

“That is when we got the phone call,” Smith explained.  That phone call last month was a stark reminder of the challenges ahead. Under court order SCAA volunteers rescued 12 dogs and four puppies from what Smith described as one of the toughest scenes her group has encountered. For safety reasons, details of the ordeal and pictures are being withheld. The canine overflow overwhelmed the SCAA volunteers, but Smith said the outpouring of support from the community to help with the extra care needed was “amazing.”

“I lovingly call them my mutt mafia, they just know when we need them,” Smith said about numerous people in the community who volunteer to help the volunteers.

“One night there was a little knock on the door and five people came in. They just said, “We just thought that you needed us. They worked around the clock with me,” Smith explained.

SCAA is a donor supported, non-profit organization founded in Water Valley in late 2014. During the group’s two-and-a-half year tenure, they have utilized the City of Water Valley’s dog pound through an agreement with the city to take care of stray or abused pets picked up by the city’s animal control officer.  The city also funds the water and electricity the organization uses and a stipend for each dog sheltered. The city also pays for a part-time employee to help at the shelter.

Smith said that the city will continue to provide the same support when the group moves to the new shelter.

“We are super excited, it has taken a long time to form this amazing relationship we have with the city. I feel like we are all finally on the same page and it is all for the greater-good,” Smith said.

SCAA is currently in negotiations with supervisors for contract that includes funding to help the organization respond to animal problems across Yalobusha County and the timing for the new shelter couldn’t be better.

“The property literally fell in our laps,” Smith explained.  Purchased from Mechanics Bank, Smith said the organization received a substantial discount on the asking price and an anonymous donor will help fund the purchase. But even with that support, along with the city contract and pending contract with the county, the group still needs an estimated $30,000 to fund the renovation for the new shelter.

SCAA takes donations through PayPal, or you can mail a check to: SCAA, P.O. Box 794, Water Valley, MS 38965. The group also has a fun fundraiser planned for Easter –  “Bunny Hops for Pound Hounds.”

On Saturday night, April 15, SCAA volunteers will help the Easter bunny make his rounds in town. The group will hide pre-filled eggs in your yard for Easter morning fun. For more details on the fundraiser, see the SCAA ad on this page.