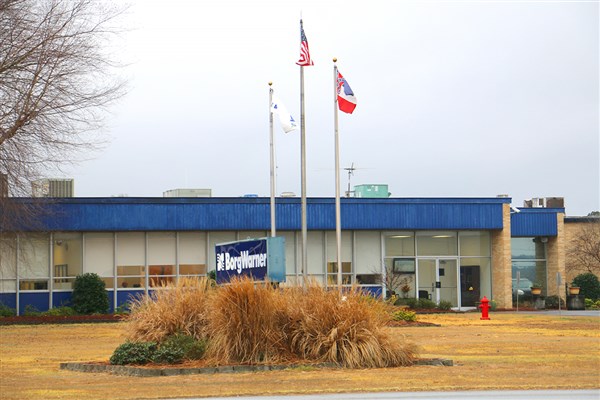 In February BorgWarner alerted employees that TCE vapor levels were detected at a hazardous level inside the plant.

WATER VALLEY – The first in what is expected to be a flurry of lawsuits against EnPro Industries, Inc., Goodrich Corporation and Oldco, LLC regarding the decades old contamination at the former Colt Industries/Holley Carburetor site in Water Valley was filed last Friday in Yalobusha County Circuit Court.

Attorney General Jim Hood filed the lawsuit on behalf of the State of Mississippi, claiming the defendants polluted the environment and contaminated the ground water with Trichloroethylene (TCE), a known hazardous substance and carcinogen.

The lawsuit, which tells one side of the story, alleges that from 1973 until 1982, the Holley Automotive Division of Colt Industries, Inc. (Colt) dumped and buried hazardous waste that contained TCE on the plant site or on properties owned by others. The suit also alleges that excessive amounts of liquid TCE from storage tanks outside of Colt’s plant building leaked, spilled or was intentionally discharged onto the ground.

“Due to the Defendants’ failure to remove the TCE from the soil at the plant site and their failure to take other necessary actions, the groundwater in the vicinity of the plant and in an ever expanding plume emanating therefrom remains contaminated with TCE,” the lawsuit states.

The lawsuit also seeks punitive damages, alleging that the defendants intentionally, recklessly or with gross negligence, released and discharged pollutants into the environment with will to harm the groundwater and surface waters of the State of Mississippi. The allegations also include that the defendants intentionally misrepresented the status and extent of their remediation of the contamination to the State of Mississippi.

The AG’s office also filed a lawsuit in Grenada County the same day, suing Meritor, Rockwell Automation, Textron and The Boeing Co., companies connected to an industrial site in Grenada that is contaminated.

The facility where the contamination occurred is currently occupied by Borg Warner Emission Systems, LLC, which acquired the facility long after the defendants released and discharged TCE into the environment.  The 14-page document traces the complicated ownership trail, starting in 1972 when Holley Automotive Division of Colt Industries, Inc. acquired the plant building and premises and started manufacturing automotive components, including carburetors and fuel injection systems.

Colt, in the form of its corporate successor Coltec Industries, Inc., continued to manufacture automotive components at the plant until 1996 when the Holley Automotive Division was sold to BorgWarner.

TCE and alleged cover-ups listed in the lawsuit

During operations from 1973 to 1987, Colt utilized TCE in several degreasing machines to clean metal parts, which produced a concentrated sludge made up of paint and metal particulate and spent TCE solvent. Periodically the sludge was removed from the degreasing machine for collection and storage in 55-gallon drums.

According to the lawsuit, Colt did not contract with an entity for the proper disposal of the sludge until 1982, and disposed of the hazardous waste by dumping or burying the sludge.

Also listed as counsel in the Attorney General’s lawsuit are Jackson law firm Liston & Deas, PLLC and Grenada attorney Reid Stanford. Both firms are among a group of plaintiff attorneys representing Yalobusha County and Yalobusha General Hospital and individual landowners expected to file similar suits against the defendants.

This lawsuit alleges that the defendants’ release of TCE into the environment and their failure to effectively remediate the discharge impacts other property owners – including 28 residential properties and 11 commercial properties. The owners of these properties include Yalobusha County, Yalobusha General Hospital, the City of Water Valley, North Mississippi Mental Health Foundation and the U.S. Corps of Engineers.

Information regarding the number of residential property owners who will file suit using the same plaintiff attorney group is not available, but last April both the hospital and county hired the consortium of attorneys that included Liston & Deas, PLLC, Reid Stanford, Texas environmental law firm Ted B. Lyon and Associates, Southaven attorney Craig Treadway and Crow Martin, LLC.

October, 1988 – The Mississippi Department of Health conducted a water assessment of a municipal well on the plant’s property and a domestic well located within a short distance from the plant. The tests revealed TCE concentrations well in excess of the EPA’s maximum contamination level.

1989 – Colt conducted a groundwater investigation in the vicinity of the plant and the results were also positive for TCE concentrations above the regulatory level.

1991-1992 – Coltec installed two groundwater treatment systems to the north of an expanding TCE contamination plume coming from the plant.

1993-1996 – Coltec excavated and treated by a thermal “cooking” process approximately 3,500 cubic yards from the plant premises.

2002 – 2016 – EnPro installed numerous monitoring wells to the north, northwest and northeast of the plant in an attempt to define the borders and dimensions of the groundwater contamination plume. In the majority of the wells testing during this time, the TCE concentrations in the groundwater exceeded the EPA’s maximum contamination level for TCE in the Water.

2011 – A remedial pumping system intended to remove TCE from the groundwater was shut down by EnPro in 2011 without informing the State of Mississippi. EnPro reports the system experienced “iron fouling”.

2016 – Testing indicated that TCE contamination had migrated to and was detected in the water of Otoucalofa Creek.

2017 –TCE concentration in the ground water underneath BorgWarner is releasing TCE vapor, which intrudes on a constant basis into the work areas of the Borg Warner plant building. Employees are notified of the threat.