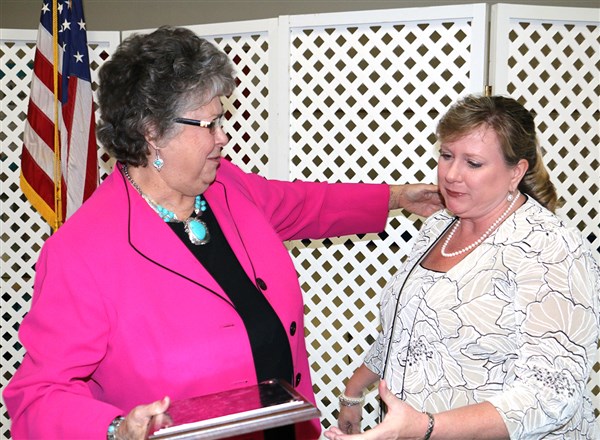 “It is an honor and special privilege to present the 2017 Braswell Hatcher Community Service Award to a most deserving, upstanding, dedicated and reliable volunteer in our community,” Stevens told the crowd. “Tonya’s willingness to work hard didn’t just begin in recent years,” Stevens added as she shared Eubanks dedication, both in her career as president of Oxford Health Care Management and her commitment to community service that includes many volunteer hours.

“She looks around to see what needs to be done instead of asking what to do,” Stevens added.

“I am very honored, I am very shocked,” Eubanks said as she accepted the prestigious award. “I enjoy helping, I enjoyed my years on the chamber, the Junior Auxiliary. Water Valley is very special to me,” an emotional Eubanks continued.

The Chamber program also included the announcement of the Elliot Scholarship recipient, presented to Taylor Anne Trusty, daughter of Taylor and Lynn Trusty. The scholarship will provide $2,000 as she heads to Mississippi State University in the fall.

Next Camille Fly Howell Dautrich was honored as the Chamber’s Honorary Ambassador. A resident of Branson, Mo. Dautrich reported it was an honor to represent the community.

“You know I love Water Valley, I haven’t lived here since the 1980s,” Dautrich said as she shared stories about her friends in the community during her growing-up days.

Lamar took the podium following the accolades and praised the community.

“I first began to love and know Water Valley back in 1970 when I went to Northwest and my roommate was Lou Ann Reed Holt from Water Valley. Lou Ann and Jerry are old and dear friends,” Lamar said.

Lamar also praised the community for the revival in town.

“It’s not every little town that gets written up in the New York Times and the Garden & Gun Magazine… Now I know what the rest of the country is finding out what I have always known, that Water Valley is a great community.

Hart pointed to numerous accomplishments in the city during the annual State of The City Address, an annual ritual at the chamber banquet. The accomplishments started with a report that all four slots at the T-hangar at the airport are full. Next Hart said a fuel farm that provides aviation fuel has been added at the Water Valley Municipal Airport.

“We expect a good draw on game days at Ole Miss and other traffic. I think we will experience a lot of growth and a lot of exposure for our community there,” the mayor reported about the airport.

Hart also said work will start soon on a $600,000 sewage grant as the city works to maintain the infrastructure.

“It takes a lot of effort to keep the city going with money, it requires a lot of grants along the way,” Hart explained.

“This past fiscal year, we have topped the $500,000 mark,” Hart said, adding that sales tax is one of the city’s primary funding sources.

In closing, Hart credited the work of the Second Chance Animal Alliance for “pouring their heart out” in taking care of abandoned and abused animals in the city.

The night ended as outgoing Chamber President Toni Hill passed the gavel to Linda Maynor and outgoing board members Tyler Hill, Charmi Weeks, Toni Hill and Michelle Washington were thanked for their service.