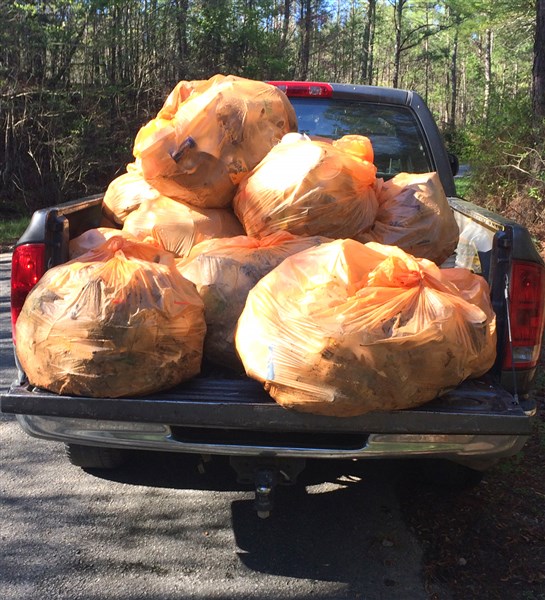 District Three Supervisor Lee McMinn shared this photo during last week’s meeting that shows 13 bags of trash picked up on a 300 yard stretch on County Road 25.

WATER VALLEY – County officials are exploring the possibility of using an inmate work program for offenders who owe fines in justice court to help combat the county’s litter problem. The topic surfaced in the “first Monday” supervisor meeting last week after multiple supervisors expressed frustration with the vast amount of litter lining the county’s roadsides.

“It’s like a third world country around here in some of these places. People just don’t care,” District Three Supervisor Lee McMinn said before sharing photos of 13 large bags of trash his crew picked up on County Road 25 near the Lafayette/ Yalobusha county line.

McMinn also cited another example about the trash problem in the county, relaying a conversation he had with a real estate client who recently moved to the county from Minnesota.

“I am thinking about hiring somebody, and paying them out of my (beat) budget to work 20 hours a week, just to pick up trash. And I hate to spend my money that way,” Board President Cayce Washington added before the conversation shifted to the utilization of a county inmate work program.

An inmate work program was adopted in 2010, which allowed justice court judges a sentencing option for non-violent, county inmates to work off fines but the program has not been utilized. Discussion about the work program will be on the agenda for the upcoming meeting, scheduled April 20, as supervisors extended an invitation to Justice Court Judges Janet Caulder and Steve Riley to discuss updating the program.

Board Attorney John Crow explained the sheriff is in charge of the program and the judges have the authority to place inmates in the program.

Speaking at the April 3 meeting, Sheriff Lance Humphreys explained offenders who owe fine money from justice court would receive a daily credit if they participate in the work program.  He also told supervisors he would utilize the program if the judges order the inmates to participate. He explained funding would be needed to employ a part-time deputy to oversee the work crew.

“What do we need to do to make it happen, do we meet with the judges and ask them. At the end of the day, it is their discretion.,” Washington said, an idea that met favor with other supervisors.  The invitation was also extended to the county’s environmental enforcement officer, Bill McMinn, to discuss enforcement options for the dumps and litter problems that he addresses.

Other business discussed at the meeting included:

• Agreed to make updates for the elevators at both courthouses to ensure the county is in compliance with safety requirements. Chancery Clerk Amy McMinn said the updates include a lengthy checklist, requirements that were not in place when the courthouses were renovated almost a dozen years ago.  She explained an estimate the county received two years ago was almost $5,000 to $7,000 per elevator.

“They are talking about fining us,” Amy McMinn added about potential enforcement if the elevators aren’t brought up to standards.

“I hate to have to spend that kind of money, but we really don’t have a choice to meet the American Disabilities Act and necessary safety measures,” Washington said.

• Approved the hiring of Anthony Trammel to work in District 2 with a salary of $2,050 per month.

• Heard a request from Circuit Clerk Daryl Burney to investigate the cost to preserve the county’s marriage license books by making digital copies of the pages.

“Our marriage license books are in pieces… these books go back to 1859, to 1833,” Burney explained, adding the actual books could be placed in storage and the digital pages could be viewed online.

A lot of people research these books, they want to look at them for family history. It is not a luxury, it is a necessity,” Burney explained.

“We are in the electronic age, it would be good to at least see what it would cost,” Washington said about the request.

• Accepted a $800 bid from Derek Bearden and Chris Bearden to cut the hay on 40 acres of county owned property adjacent to Ajinomoto Windsor Foods.

•  Approved a request from constables Ralph Horton and Randy Simmons to attend the constable convention.