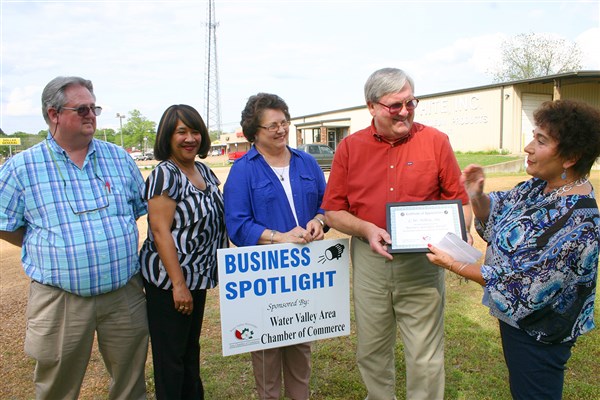 The company has been a longtime supporter of both the community and the Chamber of Commerce and was started by Tommy White’s father, the late C.W. White.

A Water Valley native, C.W. (Bill) White served in the U.S. Navy during World War II, and then returned to Mississippi where he worked briefly with his father-in-law, Tom Humphreys, in Crenshaw. Deciding that a carpentry career wasn’t for him, he accepted a job with C. B. (Barney) Sigler September 1, 1946 at the Standard of Kentucky Bulk Plant in Crenshaw, as plant manager and route salesman. In 1950, he had an opportunity to move back home to Water Valley to become the agent for the Standard of Kentucky Bulk Pant. In 1953, he built the company’s first full-service gas station on Central St., operating both businesses in Water Valley until 1972.

A devastating tornado in Water Valley in April 1984 destroyed the original C. W. White, Inc., office building on Central St., just two weeks following the completion of a total remodeling. In a few short weeks, the exterior of the business changed from Chevron, to Texaco, and then to post-tornado destruction. The office was rebuilt in 1986 at the same location, where the business headquarters remains today.

Bill’s oldest son, Tommy, began his life-long career in the family business June 1, 1957, at the age of 10. After graduation from Ole Miss in 1969, he became a full-time employee, assuming the business and accounting management of the company in Water Valley. Also graduating from Ole Miss, and after serving in the Navy, Bill’s other son, John White, joined the company managing the Sardis Bulk Plant petroleum distribution. At one time, all four of Bill and Jeanette White’s children, including daughters, Becky and Ginger,  worked in the family business, which has served North Mississippi in continuous operation for 67 years.

In honor of this Business Spotlight award, the Water Valley Area Chamber of Commerce is offering a $25 gas gift certificate to the person whose name is drawn at noon on Friday, April 28. Everyone is encouraged to participate in this drawing and you  have 10 days and two ways to sign-up between April 19 and 28.

To enter stop by the Chamber Office any time during regular office hours, or sign up on the CHAMBER’s Facebook page. Go to: Water Valley Area Chamber of Commerce, and find the post called “Win a $25 Local Express Gasoline Gift Certificate.” Then type a COMMENT stating the lowest price you’ve ever paid for gasoline per gallon anywhere, any brand, any kind. (Note: “LIKES” only will not be included in the drawing.) Both type ballots will be collected and combined, one per person; and the winner will be called or notified on FaceBook.

The winner may redeem the gift certificate within one month at C. W. White, Inc. 914 Central St., during regular business hours. The winner’s name and photograph will be published in the following edition of the North Mississippi Herald.