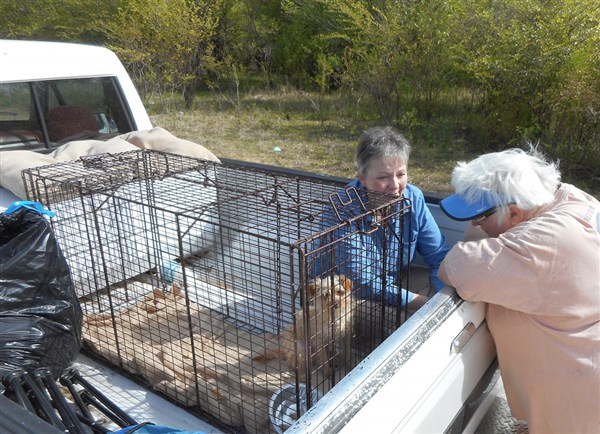 Jessie Gurner (seated in truck) and Pam Timmins prepare to transport the little dog to Timmins shop for a bath and trim. Jesse, as he was later named, is leaning against Gurner for the trip.

It took a couple of days, but a small dog apparently dumped at Wildcat’s Break is now safely in the hands of rescuers.

It also took the skills and equipment of some well-trained animal rescue people to help with the capture. But, at the end, it may have been a sausage and biscuit that finally did the trick.

It’s not known how long the little male mixed-breed had been living in Enid Lake’s backwater area. However, his rescue began Wednesday evening when he was spotted by local artist Mari Foster, who was photographing the sunset.

Foster approached the little dog, but he kept his distance. “He wanted so badly to trust humans again, but was afraid to after he was obviously abandoned by someone he had trusted,” Foster said. “It was really sad to see.”

Foster put out the word that the little fellow had been put out at the lake and was in danger and the rescue was on.

After a couple of failed attempts by some well-meaning amateurs late Wednesday night and Thursday morning, the Second Chance Animal Alliance was asked to help and Pam Timmins responded. She joined Jack and Jessie Gurner and Eddie and Mari Foster, who were back out Thursday evening attempting to coax the little dog to safety.

But, he was having none of that. He stayed one step ahead as the human’s ran around like characters in a roadrunner cartoon. When the little dog would tire of the chase, he would lay down and watch the rescuers from a shady spot under a truck or at the edge of the woods.

The group was joined by Dawn and Charlie (last name unknown), a couple who had come to the lake to enjoy some quiet time. It was their Chihuahua who attracted the little dog’s attention. He had run to their truck when they drove into the parking lot apparently thinking they might be his original family. He had checked out several pickup trucks in the same way, apparently looking for his people.

Reluctantly, the group shut down the effort for the night after the little dog had outsmarted and worn them out. Another session was scheduled for Friday evening, when they were joined by Melissa Smith and Sandra Evans. The SCAA members also brought a large live trap which Smith crawled inside to inspect before baiting the device.

Because the little dog seemed to like other canines, the Gurner’s Pekingese, Beau, was brought to the scene. The game was on for the third evening. But, even something to eat and a friendly dog buddy weren’t enough to coax the little dog into the trap. Although concerned for his safety, the group shut down their efforts again. The trap was left baited with food in hopes that he might get hungry enough during the night to go in.

Saturday morning Timmins and the Gurners returned to the lake early. The trap was still empty, but the little dog seemed less afraid of the rescue team and acted as if he recognized them. They had brought another dog, Gizmo, and some sausage and biscuits for their breakfast from the Gas Mart convenience store on Frostland Drive.

Everyone sat quietly and let the little dog check them out and look over the selection of vittles inside the trap. He walked around it several times before going in part of the way, but his lightweight frame wasn’t enough to trigger the large device.

It was decided some rigging was needed and a rope was attached to the trap’s door. A slight tug would release the trigger and the door would fall, closing the trap. Jessie Gurner used her sausage and biscuit as bait and he seemed to really like the southern delicacy. She tossed little bit on the ground near her feet and the little dog came almost within reach.

She broke the sausage into small bits and tossed them on the ground right in front of the trap and them put pieces inside from front to back. This time he took the bait. Everyone froze as the little dog went inside. When he moved toward the center, the rope was pulled and the door slammed shut.

Unaware of his good fortune, the little dog whimpered quietly and looked for a way out. Rather than traumatize him further, it was decided to leave him in the cage for the trip to Timmon’s shop, where he would get a bath and have the knots removed from his fur.

Jessie Gurner climbed into the back of the truck with him and put her hand against the trap. The little dog responded by putting his paws against her hand. He quieted and leaned against Jessie’s side of the trap for the rest of the trip.

Later Saturday, this was posted to the SCAA FaceBook page: “Meet Jesse. Jesse has been living at Wildcats (a boat ramp/wildlife area here in Water Valley) for some time now. But this morning was Jesse’s last day on his own! He was rescued by some very patient, loving friends who have been trying to rescue him for days. Their hard work paid off and now Jesse is safe!”

“He has had a bath and is getting snuggled up and loved on. We are in search of Jesse a foster family to be the bridge to help get him to his forever home!! He is a little guy (around 8lbs). He’s not very old, but is an adult. He will need someone that will show him love, give him lots of human contact, and know when he is overwhelmed. Fostering costs nothing- just a happy home willing to love him. Please let us know if Jesse can come stay in your home.”

For more information about how to foster Jesse or contribute to his upkeep, go to www.secondchancems .org or to their Facebook page, Second Chance Animal Alliance. You can also call 662-801-2172. The need is great in our area, please consider giving.