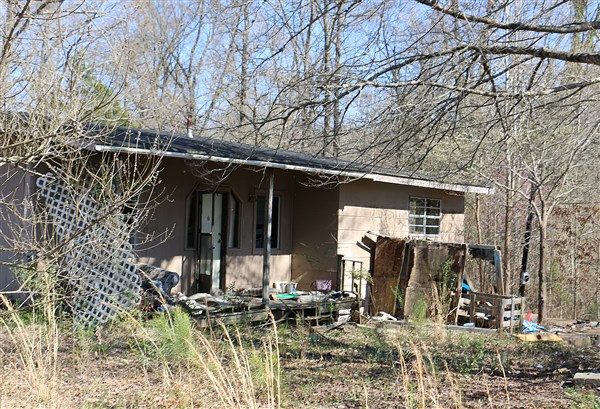 Supervisors granted a 30-day extension for Dorothy Holland (property shown above) and Carol Holland (property not show) to clean up their property on Pine Ridge Circle in the Water Valley Boat Landing community during a hearing Monday. The hearing was scheduled to address a petition filed by 16 neighbors who live in the vicinity, requesting the county take action to clean up the property. During the hearing, supervisors cited there was enough evidence to warrant the property was a threat to the public health, safety and welfare of the community before then granting the extension to allow more time for cleaning up. – Photo by David Howell

COFFEEVILLE – Hearings were held in Monday’s supervisor meeting to address a pair of petitions filed in the Chancery Clerk’s office back in March requesting the county to clean up private property straddling the entrance of Pine Ridge Circle in the Water Valley Boat Landing Community.

Property owner Carol Holland attended the hearing as county officials weighed evidence to determine if her property is in such a state of uncleanliness that it is a nuisance to the public health, safety and welfare of the community. The hearing was part of the due process to determine if the county can take action to clean up the property and assess the cost to the property’s tax bill.

Holland told supervisors that family members have been working to clean up the property in a conversation that turned into a back-in-forth exchange before supervisors voted that the property was a nuisance and granted a 30-day extension to take care of specific problems identified as abandoned cars and an unoccupied mobile home, garbage and debris piles on the property and debris remaining from a trailer that had been dismantled years earlier.

Pointing to the petition signed by 16 people who live in the immediate vicinity of the property, Board President Cayce Washington explained that the property must be cleaned up to meet a level of satisfaction under the state law.

“I can only do so much in a short period of time,” Holland argued.

“Ms. Holland, this has been like this for a number of years,” Washington explained.

Points of contention included an abandoned mobile home, which Holland and her daughter explained were being used for storage.

Board Attorney Shannon Crow explained that the state law addresses issues that are a nuisance to the public health and welfare of the community, before adding that supervisors have discretion in applying the law.

“There is some certainty as to uninhabitable houses,” Crow continued, noting that this would mean there is no power or sewage connected to the house or trailer. The attorney also cited broken glass would meet the criteria in the law, as well as tall grass.

“When it gets to the point that neighbors are unsatisfied with it, they have the legal right to file a petition and they have done that,” Washington explained. “We are going to give you the opportunity to clean it up, as best you can, but it needs to be cleaned up to the satisfaction of this board. I know it is your property and you should be entitled to live as you wish.  But when it can impact the health of neighbors, as stated by law, we have to address that,” Washington continued.

Holland also criticized coverage of the incident in the North Mississippi Herald, noting that a picture on the front page when the petition was filed had caused her enough problems.

“I don’t want to see me on the front page,” Holland continued, noting that the picture in the paper of her property back in March had more prominent coverage than a picture of a “well-known” funeral home that burned the same week.

“My thought is that what it is going to take to make those 16 petitioners happy is that they see all of the remnants of the mobile home gone,” District 3 Supervisor Lee McMinn said as the topic shifted back to the matter. McMinn, whose district includes the area, then provided the list of issues that needed to be addressed in the cleanup to resolve the matter.

“How long do you think you need to get this done?” McMinn asked, before the 30-day extension was granted.

In the second hearing for adjacent property owned by Dorothy Holland, a family member attended the hearing and also reported work was underway to clean up the property.

During the hearing supervisors also deemed there was enough evidence to warrant action is needed because the property is a menace to the public health, welfare and safety before granting a 30-day extension to clean up the property.  Evidence cited in the second hearing that must be addressed included an abandoned mobile home with broken glass, rotting porches and decks and trees growing up around it, trash on the property and an abandoned boat on the property.