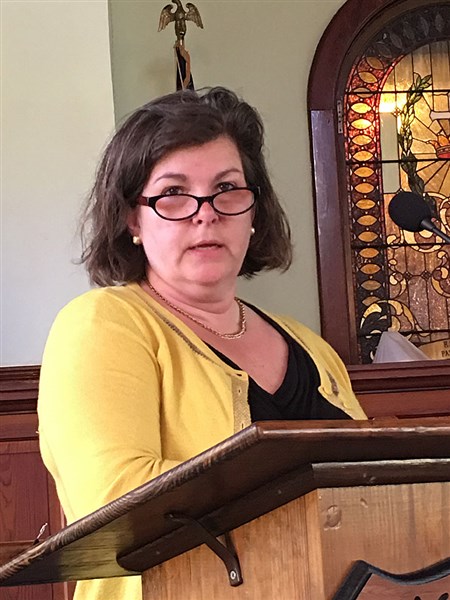 Let’s face it:  The label “historic””’ gets applied to so many different kinds of places – What is it that makes a place “historic”?  And who decides what’s “historic” and what isn’t”? From ancient ruins and seats of government to World War II battlefields and to Art Deco skyscrapers to gas stations and fast food restaurants – sometimes it is hard to figure out exactly what it means.  With these statements Michelle Weaver Jones began her topic on historical preservation at the April 20, Yalobusha Historical Society Meeting.

When you strip away all the jargon and rhetoric, historic preservation is simply having the good sense to hang on to something – an older building or neighborhood or a piece of landscape, for instance – because it’s important to us as individuals and/or as a nation.

This importance may derive from any of several factors.  Some older buildings are important simply because they’re good to look at.  As one author put it, they are “a gift to the street” whose style, textures, materials, and charm (and maybe even eccentricity) enrich and enliven their surroundings.  These buildings are worth saving because our communities would be less interesting, less attractive, without them.

Others are worth saving because they have plenty of good use left in them.  Innovative examples of what’s called “adaptive use” can be found everywhere.  Factories have been turned into convention centers, train stations reborn as restaurants, mills converted into shopping centers, office buildings transformed into apartments, and on and on.

This process is good for the environment:  think of it as the ultimate recycling.  It can be good for the pocketbook too, since reusing an old building means avoiding the expense of demolition and saving materials and craftsmanship that are costly (or even impossible to replace today).

Finally, some places are worth saving because they link us with our past and help us understand who we are.  Places like Gettysburg, the Alamo and Independence Hall tell America’s story, and we’d never allow them to be destroyed.

But places that tell your story are worth saving too: the house where your grandparents lived, the school you attended, the movie theatre where you had your first date, the church where you were married.

That’s what historic preservation is really all about. It’s about hanging on to what’s important.

Jones is on the staff of the Mississippi Department off Archives and is the Local Preservation Assistance coordinator. Thank you, come again, Michelle.