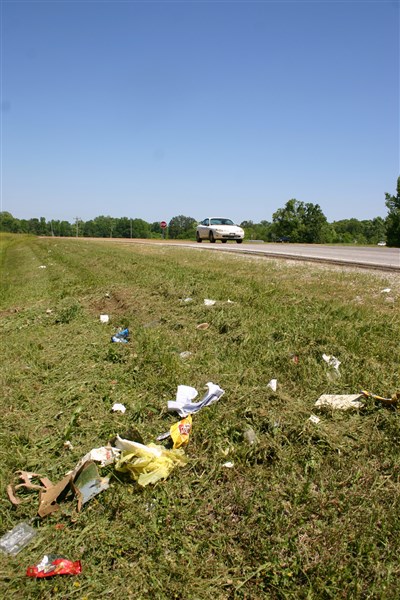 A fresh cut right-of-way on County Road 436 exposes a winter’s worth of litter. County officials are looking for ways to help combat the problem.

COFFEEVILLE – County officials revisited the discussion about using inmate labor to combat litter on state highways and county roads during the “first Monday” meeting held May 1 at the Coffeeville courthouse.

The topic surfaced last month and supervisors agreed to extend an invitation to the justice court judges to determine the feasibility of using community service as a sentencing option or as a fine payment option for offenders in justice court.

“The question is what can we do to work collectively at the local level to address the littler problem,” Board President Cayce Washington said as the discussion got underway.

District 1 Justice Court Judge Janet Caulder recommended revising the inmate work program that was adopted by supervisors in 2010 but has never been utilized.

“I think we need to revise our county work problem because of the inmate terminology. I am not going to sentence somebody to jail just to pick up garbage, it could potentially have adverse effects for that person down the road. They might be a good, upstanding citizen that just might not be able to pay their fine because of medical issues or whatever,” Caulder explained. “Down the road they want to go to nursing school or whatever and that could be a negative impact.”

Caulder added that she was in favor of utilizing a work program that would allow an offender an option to work off a fine without being incarcerated and recommended revising the work program with joint input from both the sheriff and Board of Supervisor attorney.

“I am pleading to our attorney, to our judges, to our sheriff’s department and all of us to come up with a solution,” Washington said.

Washington added that it is important to send a strong message to people who are caught littering by imposing the maximum fine as the conversation shifted from utilizing the court system to enforcement options and Bill McMinn, the county’s environmental enforcement officer, joined the conversation.

“What I would like to have is a citation book,” McMinn said, explaining that he would like to be able to write a citation without having to go through a lengthy process that currently requires him to go to justice court and make out papers before a warrant is issued for a citation.

McMinn explained that his enforcement includes examining illegal dumps to find a name on a letter or other identifying items to warrant charges for littering.

“If we can do that, I would like to work toward that,” Washington said about allowing McMinn to write citations.

Discussion on the topic ended as supervisors agreed that more legal research was necessary.