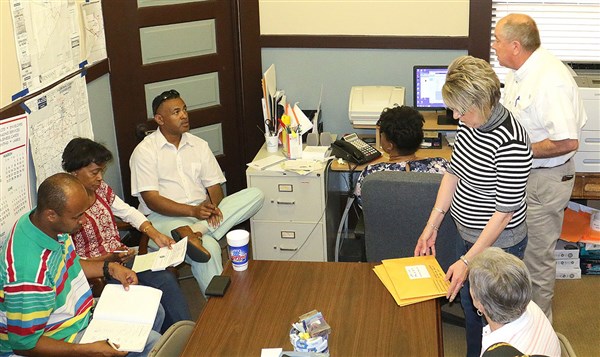 WATER VALLEY – Two-term incumbent Larry Hart will face Terry Rockette in the Democratic Primary Runoff for mayor on Tuesday, May 16. Hart received 38 percent of the votes cast  in the four-way race for mayor in last Tuesday’s Democratic Primary, 60 more votes than Rockette. Herbie Rogers trailed only 10 votes behind Rockette with 240 votes, and a fourth candidate, Cynthia Harmon received 20 votes.

The race for Ward 1 was the closest election on the ballot after Coughlin received 124 votes and Cox tallied 122 votes. The race was not settled until Wednesday afternoon after the city’s election commissioners checked the authenticity of 19 affidavit ballots and deemed that four were qualified electors. Of the four ballots counted, two were in Ward One and Cox and Koughlin received one vote each.

Only one race in Water Valley will not be settled after the Democratic Primary Election, as Ward Four incumbent Larry Bell will face political newcomer Nicole Folson in the General Election on June 6. Bell is running as an independent candidate and Folson is running as a Democratic ticket.

Absentee voting for Tuesday’s runoff will continue at the municipal clerk’s office in Water Valley City Hall until noon Saturday, May 13, which is the deadline to cast an in-person absentee ballot for the mayor’s race. The clerk’s office will be open from 8 a.m. until noon on Saturday, and is also open during normal business hours for the remainder of the week.

In Mississippi, registered voters are eligible to vote absentee because of age, health or work demands, or their affiliation with the U.S. Armed Forces. For example, a voter who will be outside their city of residence on election day is entitled to vote by absentee ballot.

The municipal elections in Coffeeville and Oakland are scheduled on June 6 in the General Election as all candidates in both towns run as independents.