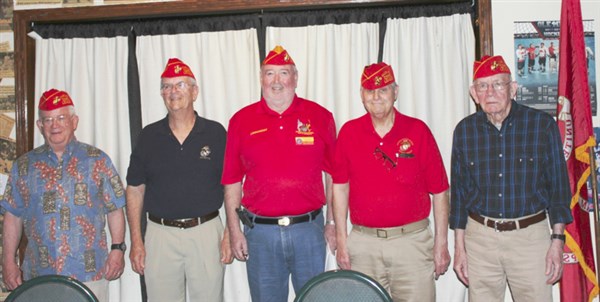 The W.M. Jones Marine Corps League Detachment #1431 installed the newly elected officers for the 2017-2018 program year at their April meeting in Oxford.  The Oath of Office was delivered by the Commandant, Mississippi Department, Marine Corps League, Ron Polk.

The Detachment, now entering their second year, held their first meetings in 2015 with a membership of 21. Since that time, the Detachment has grown to 35 members.

Beside Toys for Tots, the W.M. Jones Detachment is developing other programs designed to help and assist Marine Corps veterans, active duty Marines and their families.

The Marine Corps League meets once per month in Oxford.  Marine veterans as well as FMF Navy Corpsmen and Chaplains are invited to join.  Associate members without any Marine Corps affiliation can join as non-voting members providing they take the membership oath supporting the bylaws and mission of the Marine Corps League.

To find out more about the Marine Corps League, their activities and how active duty Marines and  veterans can join and participate, you are asked to call Jerry Daum, 612-473-6382.