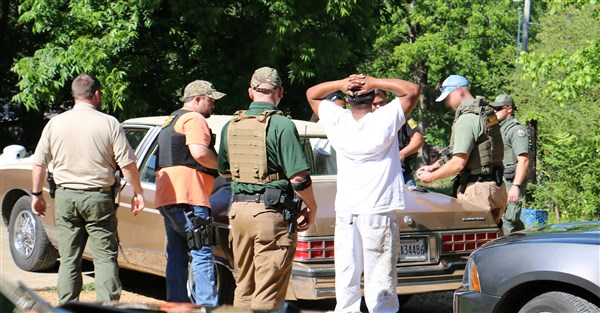 More than 30 law enforcement officials from multiple agencies participated in a saturation last Thursday. Fifteen arrests were made during the detail including this one in Oakland. The operation started mid-afternoon and continued until midnight.

Humphreys said 15 arrests were made during the operation, which got underway mid-afternoon Thursday and continued until midnight.

“It was a show of force and I can’t tell you how many law abiding citizens we encountered at safety check points thanked the officers for their work,” the sheriff reported about the evening. He also said he had been communicating with MBN for several months to bring the operation to the county.

Agencies involved with the operation in addition to the local departments and Yalobusha constables Ralph Horton and Randy Simmons included the Calhoun County Sheriff’s Depart-ment, the Mississippi Department of Wildlife, Fisheries and Parks, the Mississippi Highway Patrol and MBN.

“The work ranged from making sure small children were restrained properly in a car seat, DUI arrests and felony drug arrests,” Humphreys said.  During the saturation officers made traffic stops, conducted driver’s license safety checkpoints and patrolled neighborhoods where suspected drug activity has been reported.

In several cases officers suspect drugs may have been thrown out the window of cars approaching road blocks, including one stop in Coffeeville where Rico “hit” on a vehicle. A thorough search of the vehicle did not turn up drugs although thousands of dollars in cash was visible on the vehicle’s floor board.

Another “hit” by Rico shortly before midnight on Hwy. 330 outside of Coffeeville was likely attributed to another case of drugs being tossed out of the window. At the same check point another car quickly turned around and the driver fled. A deputy briefly pursued before the chase was abandoned due to the speed.

The arrests mug shots are included on this page.