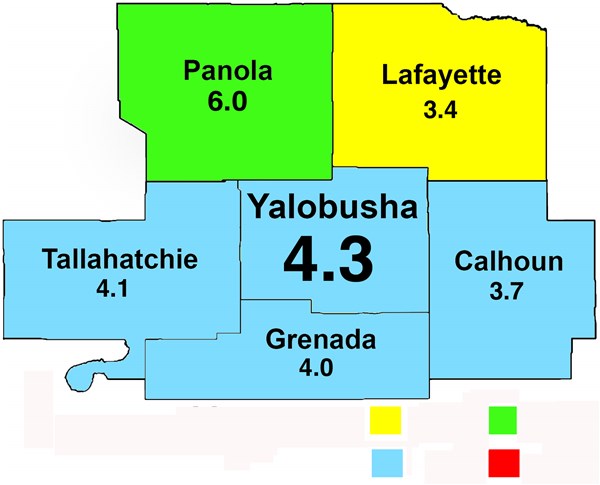 WATER VALLEY – Yalobusha County’s jobless rate dipped to 4.3 percent in April, the lowest rate for the county in 22 years with only 220 people in the county recorded as unemployed, according to the latest data from the Mississippi Department of Employment Security (MDES).

April’s jobless rate dropped seven-tenths of a percentage point from March (5.) and mirrors a similar decline in the statewide unemployment rate in April. Mississippi’s jobless rate was 5.0 percent, tying the lowest level since January 1976 when the current method of calculating state unemployment rates started.  Since 1976 the Mississippi rate has been 5.0 percent in ten months but never lower.

Statewide the monthly MDES report indicated the number of unemployed in Mississippi fell in April by 1,100 people to 64,700. In Yalobusha County, 4,870 people in Yalobusha County were employed during the month out of a labor force of 5,090. The labor force is defined by MDES as the estimated number of people eligible for work or actively seeking employment.

In comparison to the five surrounding counties, the Yalobusha unemployment rate was less than Panola (6.0), but higher than Tallahatchie (4.1), Grenada (4.0), Calhoun (3.7) and Lafayette (3.4).

ssaquena County had the highest unemployment rate for April at 11.1 percent.