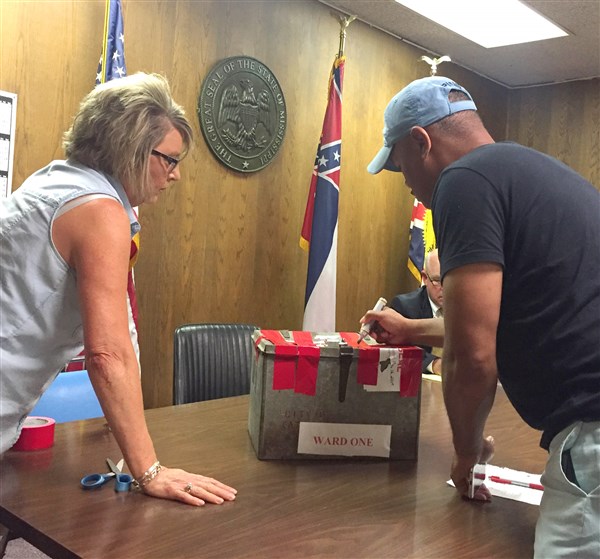 Water Valley mayoral candidate Terry Rockette (right) spent more than three hours last Friday at city hall examining the ballot boxes from the May 16 Democratic Primary Runoff Election held on May 16. Rockette was defeated by incumbent Mayor Larry Hart by 66 votes in the contest. The deadline to contest the election in circuit court was Monday, June 5, which is 20 days following the May 16 runoff. With Rockette during the examination is City Clerk Vivian Snider.

At presstime Tuesday, the results for the Ward Four Alderman race in the City of Water Valley were not available. The race is the final contest in the city as incumbent Larry Bell faces Nicole Folson.The results will be included in next week’s edition of the Herald and posted online at yalnews.com.

Bell was running as an independent and Folson as a Democratic, pushing the race to Tuesday’s General Election ballot.

All other races in the city were settled in the Democratic Primary Election. The winner of the Ward Four race will take office next month along with the winners from last month’s primary race including: incumbent Mayor Larry Hart, incumbent Alderman-at-Large Donald Gray, Ward One Alderman Kagan Coughlin, incumbent Ward Two Alderman Fred White and Ward Three Alder-woman Cinnamon Foster