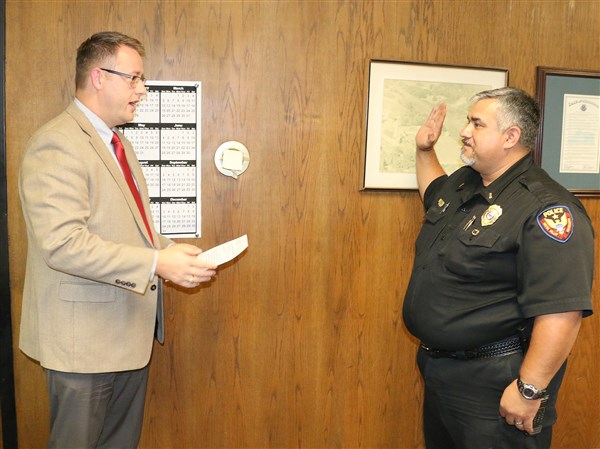 WATER VALLEY – Aldermen hired a new police chief, heard a lengthy list of grievances from a disgruntled property owner and handled routine business during the June 6 city meeting.  Tony Hernandez, a 17-year veteran of the Water Valley Police Department was tapped to be the new chief in a unanimous vote by aldermen. He succeeds longtime chief Mike King, who retired last month. Hernandez is also a retired military veteran, seeing combat duty in Iraq.


“I am pleased that we were able to hire from within,” Mayor Larry Hart said after the meeting about promoting Hernandez from lieutenant to chief. “Chief Hernandez has done a remarkable job over the years for the City of Water Valley Police Department, he has been training under former police chief Mike King.”


“Chief Hernandez has served our city well and he has served our nation well.  He has seen combat duty in Iraq, that’s very impressive to me and I am sure to his supporters in the community,” the mayor explained. “We look forward to Chief Hernandez becoming the best police chief we have ever had.”


Hernandez was sworn in immediately after the meeting by City Judge Daniel Martin after Hart explained he needed a chief immediately.  King’s retirement on May 31 had left Hernandez in charge of the department until the June monthly meeting when aldermen could address the matter. The meeting will likely be the last one for three of the five aldermen who were not reelected.


Other business handled at the meeting included:


• Willie Foxx shared a lengthy list of grievances, some dating back for decades, involving the property he leases to the city for use as a rubbish landfill.


Foxx’s criticism was primarily directed at Hart and Street Department manager Mike Scroggins and included the lack of sewage service on his street, the removal of a fence at the rubbish pit by city workers, messing up a pond fed by an artesian well where he stored fish, a surveying discrepancy and others. Foxx said he had leased the property to the city four almost for decades and many times had been told the issues would be addressed. He also said the treatment is discriminatory because he is black.


“He knows what I am talking about, he has spent more gas coming to Birch Street than he does going out to eat,” Foxx said to Hart as he also levied other allegations against the mayor and city workers.


“It’s like mixing cough syrup and molasses together, you are going to have a bad mess before it is over,” Foxx said about the street department manager.


“We will certainly be attentive to these things he has mentioned tonight. We have been attentive to a lot of them,” Hart said following Foxx’s comments.


“Hopefully most of them are within our reach. I work with Willie pretty close, like he said I burn a lot of gas going up there to see him. Contrary to what might appear, we get along pretty good.”


Hart added that the city is planning on putting the fence back in shape. He also noted that there has been development on the dead-end road leading to multiple houses where the rubbish pit is located and the city does not currently provide sewage.


“We are definitely planning on putting that fence back in shape,” Hart continued.


Foster also reported that a new restaurant, Trusty’s Diner, will open on Main Street across from the Water Valley Chamber of Commerce office.


“There is a big mystery of what they are going to be serving, that is going to be a big surprise, the talk of the town on what we might be getting to eat,” Foster said.


Foster also thanked the aldermen for their support of Main Street.


“There are others under construction,” she added.


In closing, Foster promoted the opening of the Main Street sponsored Farmer’s Market that got underway this month. She explained the weekly market was moved from Saturday morning until Friday afternoon to keep from competing with numerous farmers markets in the area held on Saturday.


• Hart reported the city has been awarded a $233,000 grant to rehabilitate the half-million gallon water tank located near the chicken plant.


“We try to refurbish those tanks every 10 years and I think we are out to about 13 years on this one,” the mayor explained. The work will include sandblasting and painting the inside and outside of the tank.

The city’s matching portion of the grant will be $48,000 and will come from the water fund.


• Approved the low quote of $18,695 from HB Sales Company for a bank of batteries used in the city’s electric department system.

Hart explained the current batteries are 15-plus years-old and have started leaking.