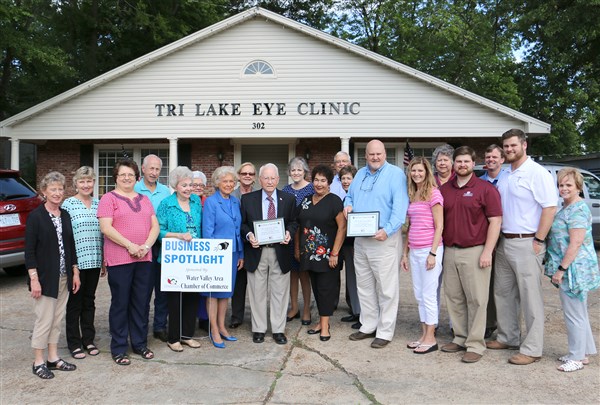 WATER VALLEY –  Tri-Lake Eye Clinic has been selected by the Water Valley Area Chamber of Commerce as the recipient of the next Business Spotlight Award.  On Thursday, June 8th, the chamber proudly presented special certificates to the two optometrists involved with this business over the years,  Dr. Rayford Edgar and Dr. Steve Edwards.  Presented by the current chamber president Linda Maynor, a large group of chamber board members, family, and Water Valley Ambassadors witnessed the event.


Dr. Rayford Edgar is a charter member and life-time supporter of the Chamber of Commerce in Water Valley, organized on February 29, 1964.  He is recognized as the sole surviving member of that organization’s first Board of Directors that included Earl Fly, Ed Shearer, Judge Kermit Cofer, Dr. R. N. Edgar, Fred Kendrick, Albert Mott, L. C. Stewart, Bill Trusty, Mrs. J. T. Williamson, Stanley Perkins, Herman White, and Oscar Parsons.  On March 30 that year, B. C. McCullar was employed as Manager and served until his death.


After completing his service in the Navy during World War II, Dr. Edgar entered the University of Mississippi to study Pre-Med/Pre-Optometry.  He began his optometric studies at Southern College of Optometry in Memphis.  After taking State Boards, he opened his practice of optometry in March of 1950, starting out in the Parker Building and later moving to the Bank of Water Valley building for about four years.


In 1974, Dr. R. N. Edgar, O.D., built the Edgar Professional Building at 302 Railroad St. in Water Valley.  He worked with many doctors and had several optometrists working with him at that location, one of whom was the current owner, Dr. Steve Edwards, who still practices in this same building.


Of Dr. Edwards, Dr. Edgar remarked, “He and his staff perform a marvelous service.”  During his 40-year practice, Dr. Edgar served on the State Board of Optometry, the Mississippi State Department of Health, and various city and state committees.  Dr. Edgar had this to say about his former patients: “My patients over the 40 years were the best in the world, and I love them and thank them for their support.”


After finishing his undergraduate work at Mississippi College, Dr. Steve Edwards, current owner of Tri-Lake Eye Clinic, entered Southern College of Optometry in Memphis, TN and graduated in 1987.  Upon returning to his hometown of Water Valley, he joined Dr. Edgar, and the present name of the business was adopted.  After Dr. Edgar’s retirement in 1990, Dr. Edwards became the sole owner of Tri-Lake Eye Clinic.  He has continued the tradition of supporting the Water Valley Area Chamber of Commerce and the Water Valley community since that time.


Dr. Edwards has served as a clinical instructor at Southern College of Optometry, as well as a proctor for the National Board of Examiners.  He presently serves on the Mississippi State Board of Optometry.


Dr. Edwards believes “his greatest professional accomplishments have been (derived) from the interest shown by his two sons in carrying on the profession of optometry.”  His oldest son Hunter graduated from Mississippi State University with a Mechanical Engineering degree and will be entering Southern College of Optometry in the fall.  His youngest son Taylor is soon to receive his degree from Troy University and hopes to enter optometry school in 2018.


It is a pleasure for the Chamber of Commerce to honor Tri-Lake Eye Clinic and the optometrists who have served there so faithfully for many years. The chamber also wishes to thank the staff members who have assisted the optometrists in improving the health and eyesight of many grateful patients.

In honor of this Business Spotlight award, the Water Valley Area Chamber of Commerce is offering a gift basket and a $20 gift certificate to Tri-Lake Eye Clinic. These gifts will be awarded to the person whose name is drawn at NOON on Friday, June 23rd.    Everyone is encouraged to participate in this drawing, and you have “ten days and two ways” to sign up between June 14th and noon on June 23rd.


You may (1) stop by the Chamber Office any time during regular office hours to sign up OR you may (2) sign up on the CHAMBER’s FaceBook page.  Go to:  Water Valley Area Chamber of Commerce, and find the post called “Win a Tri-Lake Eye Clinic Gift Certificate & Gift Basket.”  Then, type a COMMENT naming your Favorite Scenic View to SEE in our own Yalobusha County. (Note:  “LIKES” only will not be included in the drawing.)


Both types of ballots will be collected and combined, one per person; and the winner will be called OR notified on FaceBook. The winner may redeem the gift certificate within three months at Tri-Lake Eye Clinic in Water Valley, during regular business hours.  The winner’s name and photograph will be published in the following edition of the North Mississippi Herald.