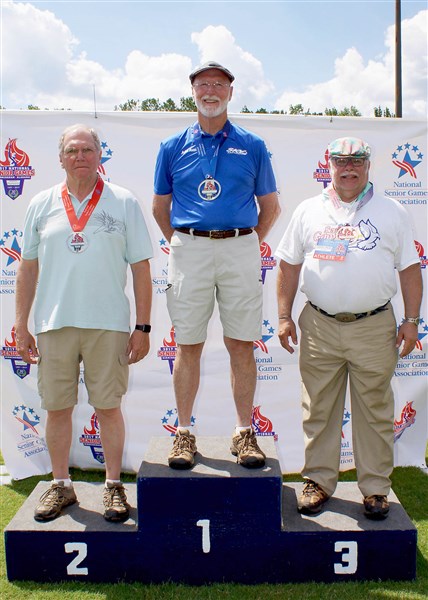 Competing in the Senior Olympics in Birmingham earlier this month, John Avant (center) won the gold medal in barebow recurve. Other winners in his category were silver medalist Real Levasseur of New Hampshire and bronze medalist Carroll Walsh of North Carolina.

The 2017 NSGA National Senior Games ended last Thursday in Birmingham, Ala. after two weeks of competition in 19 different sports. Better known as the Senior Olympics, there were 10,000 athletes, ages 50 and up competing, and Water Vallian John Avant was among them. He brought home a gold medal in archery, winning first place in his age group, 65-69, and shooting the overall high score in his class, barebow recurve.

In fact, Avant’s score of 1466 was only 12 points shy of the all-time world record in barebow recurve. At 67, Avant has competed in archery shoots for years, but has only recently started competing in the style used in the senior Olympics where competitors shoot at targets from 40, 50 and 60 yards away.

“This Olympic stuff is totally different,” Avant explained, adding that before he started practicing this style he had focused on outdoor 3-D shoots where competitors set their sights on animal targets typically set up in a wooded area to simulate a real hunting experience.

Avant also admitted that he was initially reluctant to tell his story of capturing the gold medal and the steps along the way that include winning more trophies than most folks will ever see in a lifetime, explaining it would look like he was bragging. But his family and friends have been nudging him to share the success, even threatening to write their own story if he didn’t cooperate.

“They keep telling me this is a pretty big deal, but this is just what I do. The Lord has blessed me with the ability to shoot a bow and I enjoy it,” Avant explained last week during an interview.

With countless tournaments under his belt at venues all across the southeast, Avant said the trip to the Senior Olympics was still a little daunting.

“All the states walked in together and there were thousands of folks.

It was a little bigger deal that I thought,” he explained. “In that environment with that many folks and stuff going on, it was a little different. If I get an opportunity again, I will probably know a little more about what I need to do.”

The Rest Of The Story

Avant first shot in a competition about two decades ago after visiting a bow shop in Oxford where his son, Johnny Avant, was working at the time. He picked up a bow and practiced a little and competed the next day in a state contest.

“I got second place,” Avant recalled. “Before that I had hunted a little, but I had never shot in a competition.”

But backing up earlier in his life, Avant explained that he was also accurate with a rifle.

“I never was the best shotgun shooter but nobody could beat me with a rifle. I could kill anything that flew, ran or jumped with a rifle,” he explained. Growing up, he explained he shot thousands and thousands of .22 caliber rounds.

“I have got a knack or talent, I just have it,” he explained. “And I can shoot this bow if I want to.”

Avant is hesitant to say if he will return to the Senior Olympics, noting the next one is Albuquerque, New Mexico in 2019.

“The only reason I would probably go to another National if I thought I was shooting well enough to break a record,” he added.