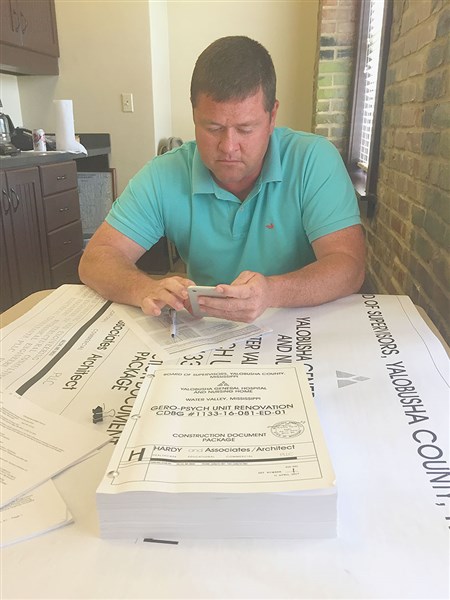 Yalobusha Health Services Administrator Terry Varner checks the math last Thursday on three bids submitted for a construction project at the hospital. The hefty bid specs (in front of Varner) also included multiple construction add-ons for the project in addition to the primary bids. If awarded, the project will flow through the county as owner of the hospital.

WATER VALLEY – A $5 million bid to renovate the interior and exterior of Yalobusha General Hospital and add a second floor that will house a geropsychology unit was the lowest of three bids taken under advisement at last Thursday’s Board of Supervisor meeting.


Yalobusha Health Services (YHS) Administr-ator Terry Varner said the bids were higher than the projected $4.5 million cost for the project and will be reviewed by the hospital board and supervisors. If the project moves forward, the geropsychology unit is expected to start serving patients in October, 2018, and will create 32 new jobs.


The project has already been awarded $640,000 in state grant funding and the remaining price will be primarily funded using revenue bonds. Speaking in a Board of Supervisors meeting last year, Varner told supervisors YHS has invested heavily in senior care during the last decade and the geropsychology unit is the next logical step to serve the community.


He also provided a description of geropsychology care, which is a branch of psychology that addresses the concerns of older adults including mental health disorders, depression and aging, anxiety and age-related illnesses.

“The geriatric population has health needs that are really being under served in the county,” Varner explained, explaining that patients who need this service are currently sent to facilities in Batesville or Houston.


The geropsychology unit has been in the planning phase for at least five years and follows more than a decade of updates, renovations and expanded services at the county’s 50-plus year-old hospital. Varner said the improvements during the last 10 years have also included other off-site projects, including clinics, a total investment of almost $14 million in health care in the county.


The anticipated renovation and second-floor addition is also part of a broader $8 million long-range plan that also includes building an assisted living center and wellness center in future years.