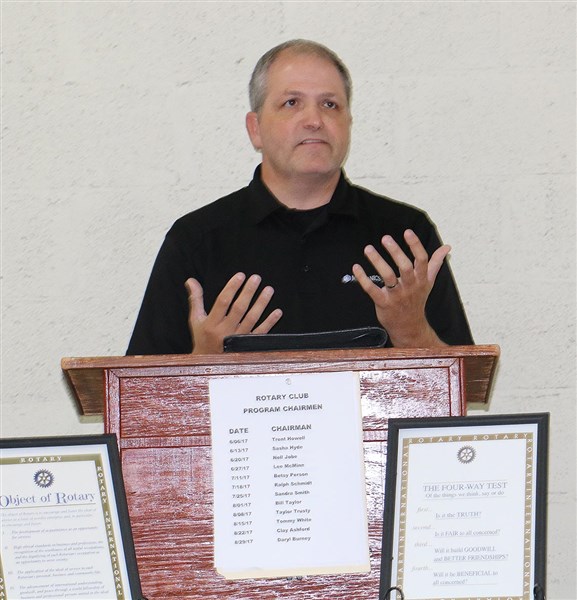 WATER VALLEY – A medical missionary team of 50 people spent a week in the mountains of Nicaragua last month. Led by Raymond Aven, the team roster included many people from area churches and was under the direction of Baptist Medical Missions International.

Speaking at a recent Water Valley Rotary meeting, Aven shared details and photos from the trip that marked the 32nd summer a group that includes a large contingency of Water Vallians has traveled to Central America for mission work. This year the team returned to a small village in the mountains to continue medical mission work and share God’s word.

“The last five years we have been led to serve in the mountains, which are among the poorest areas in the country,” Aven noted.

He also explained that by the time the team entered the village, their number swelled to 80-plus with the addition of locals hired to assist. The extra help included 19 interpreters, three Nicaraguan doctors, two dentists, a cook, a security guard and other helpers. Interpreters are assigned to different stations, one with every nurse, two in the pharmacy. The tent also has interpreter and preaching is also done through an interpreter.

“They are spread out all over the village,” Aven explained about the interpreters.

The patients ranged from only several weeks old to almost 90 years-old and included lots of babies this year.

“They come to get food and medicine and see the doctor or dentist,” veteran team member and former leader Binnie Turnage added. “But before they do that, they hear the gospel and have the opportunity to respond.”

“We know of 137,” Turnage said about the professions of faith from sharing the gospel during the trip.

The work also included the completion of a parsonage, a 23×23 metal building with a large porch. Amenities in the house also include a shower, toilet, sink, kitchen and two bedrooms.

“It is one of the nicest houses in the village,” Aven told Rotarians.

The team will also fund additional treatment for nine patients who visited the medical team during the week. The treatment ranged from eye problems to one patient with a hernia.  The total cost for treatment will be about $8,500

Turnage explained that  meeting humanitarian needs opens the door to share the love of Christ.

“The whole team is the body of Christ, everybody is working together,” he noted, adding that this year his age made him hesitate to make the trip.

“The old devil was wearing me out before we left,” he added, explaining that he contemplated if he could stand up to the trip before they left.

“Sometimes you think you are just one person and can’t make a difference Remember, when God got ready to send his son, he sent one man,” Turnage said.

“If you think that one doesn’t make a difference, you haven’t ever been to bed with a mosquito. I was reminded of that, too,” Turnage joked.