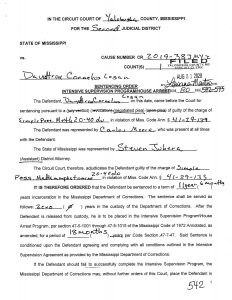 WATER VALLEY – A Water Valley man avoided incarceration after pleading guilty Monday to two criminal charges that stem from a 2019 arrest that made national headlines.
Davidtron Logan entered a guilty plea for possession of methamphetamine and simple assault in Yalobusha County Circuit Court in Water Valley and received a suspended 11 year, six month sentence for the drug charge and a suspended six month sentence for the assault charge as part of a negotiated plea agreement. The sentences will run concurrent.
Circuit Judge Jimmy McClure also ordered that Logan be placed in the intensive supervision program/house arrest program for 18 months. According to the sentencing order, if Logan successfully completes the 18 month house arrest program,  he will remain under post release supervision for the remaining 10 years of his sentence. If Logan violates the terms of the 18-month house arrest, he will be placed in custody of the Mississippi Department of Corrections to serve the remainder of his sentence in a state prison.
Logan’s arrest on July 18, 2019, made national headlines after his attorney, Carlos Moore, reached out to the press with allegations that white law enforcement officers beat Logan, who is African American. Moore also said Logan had to be treated at two hospitals for a broken bone near one eye. The attorney released a picture that showed Logan sitting with his hands behind his back, his face bloody and one eye swollen shut.
Following Moore’s accusations, law enforcement officers involved in the arrest also answered questions from the press and refuted the allegations, explaining an altercation occurred after Logan resisted arrest and injured two officers on the scene. Law enforcement officers also claimed Logan tried to toss a bag that contained methamphetamine from his vehicle as he approached the road block.
Last  December a grand jury in the Second Judicial District of Yalobusha County indicted Logan for two counts of simple assault on a police officer and one count of possession of methamphetamine with intent to distribute. In Monday’s plea agreement, the drug charge was reduced to possession of methamphetamine. One of the counts for simple assault on a police officer was reduced to simple assault, and the second count was remanded to the file.

Federal Lawsuit
The arrest also led to a federal lawsuit seeking $5 million in damages against the City of Water Valley and Yalobusha County for alleged police brutality against Logan. Moore filed the federal complaint in U.S. District Court on Feb. 13 alleging Logan’s Fourth, Eighth and Fourteenth Amendment rights to be free from excessive force and cruel and unusual punishment were violated. According to the lawsuit, which tells one side of the story, Logan approached a checkpoint in Water Valley after he was asked to pull over and exit his vehicle because his driver’s license was suspended.
“Individually named Defendants brutally attacked Mr. Logan, beating him with their flashlights, pushing, choking, punching, and striking him all while Mr. Logan was unarmed and detained in handcuffs. Prior to being handcuffed, Mr. Logan suffered being tazered by officers and/or deputies of Defendants City of Water Valley and Yalobusha County,” the federal filing reports. Individual defendants named in the lawsuit include deputies, city police officers and two agents with the Mississippi Bureau of Narcotics.
The suit also alleges that not one single deputy, agent or officer attempted to stop the attack or intercede to prevent further abuse or offered proper medical assistance.

Monday’s Sentencing Allows Suit To Resume
Monday’s sentencing will allow proceedings in the federal court to resume after the lawsuit had been on hold while the state charges against Logan were adjudicated.
U.S. Magistrate Judge Roy Percy issued an order granting a motion for a stay on May 18 after attorneys for both the City of Water Valley and Yalobusha County filed the joint motion requesting a stay, noting “…it has long been held that federal courts should not interfere with ongoing criminal proceedings in state court,” in a five-page court filing.
Moore filed a response in opposition to the motion requesting the stay.
“A drug conviction has no bearing or relevance here. Simple assault conviction based on actions Plaintiff may have taken prior to being put in handcuffs likewise will have no bearing on the Plaintiff’s ability to purchase his claims against the Defendants for actions taken by them once he was in handcuffs. There is no requirement for a stay in this instance,” Moore argued in the four page filing.
Judge Percy ultimately ruled that  the stay was proper.
“Having reviewed both the motion and response, the court concludes that a stay is proper. Federal courts have held for many years that state courts should be ‘free from interference by federal courts,’” Percy wrote in his order.
He also directed attorneys in the case to notify the judge within seven days of the conclusion of the criminal proceedings against Logan. Monday’s sentencing will start the seven-day timeline to notify the judge.