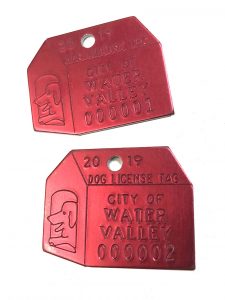 WATER VALLEY – City officials adopted a new ordinance regulating the licensing, registration, owning, keeping and harboring of all dogs in Water Valley during their monthly meeting on April 6. The eight-page ordinance includes requirements from earlier ordinances that prohibit  dogs from running at-large and requires annual registration. The new ordinance addresses dog poop problems, requiring owners to pick up and dispose of waste if their dog defecates on property that is not owned by them.

The ordinance also puts stringent restrictions on owners of dogs that could be a threat to humans or other animals. While specific dog breeds are not addressed, dogs that can be a threat to humans or other animals are defined in three categories  – dangerous, vicious or potentially vicious. The ordinance prohibits all dogs from running at-large, but dogs in these categories  must be on a leash not longer than four feet when off the owner’s property. The person who restrains such dog must be at least 18 years of age and physically capable of handling the dog.  No owners of a dangerous, vicious or potentially vicious dog shall allow or permit such dog on any public park, walking track, sidewalk or walkway of the city sports complex at any time, even if it is restrained by a leash.

Application for a license must be made within 30 days after acquiring a dog over four months of age. The requirement does not apply to non-residents keeping a dog within the city for less than 30 days. Following the initial licensing of a dog, the owner must reapply each January, providing the owner’s name and address. Other information includes the name, breed, sex and color of each dog owned by the owner.  Owners must provide certification that their dog has been vaccinated for rabies. The annual registration fee is $5. The city-issued tag shall be affixed to the collar or other suitable material on the dog at all times.

Any dog not registered or found running at-large shall be impounded in the city animal shelter or other sustainable place. No later than three days after impoundment, the ACO shall make a reasonable attempt to notify the owner by telephone, personal contact or by registered or certified mail. If the owner of the dog is unknown, a written notice shall be posted at City Hall describing the dog and place and time the dog was impounded. The owner may reclaim the dog upon having such dog vaccinated (if not already vaccinated), and paying $10 for impoundment and $5 per day.

Any dog not reclaimed after seven days shall become the property of the city and may be humanely euthanized or humanly disposed by giving same to a non-profit for re-homing.

Discussion about the ordinance first surfaced over a decade ago following an attack on a resident walking on Wood Street in 2010. The former board discussed her request to update the city’s ordinance to address vicious dogs in the city and initial work started. A frequent topic in the years that followed, aldermen have worked to fine-tune the ordinance in multiple meetings since January. As reported in the January 21 edition of the Herald, city officials noted the problem of people not picking up behind their dogs on public property had been a big issue.

Details of the ordinance were discussed in a special meeting last month, and the proposed ordinance was posted at city hall in March. The ordinance takes effect next month.

Mark Your Calendars! 51st Watermelon Carnival Is August 6 And 7

City-wide Cleanup Day Scheduled For May 22