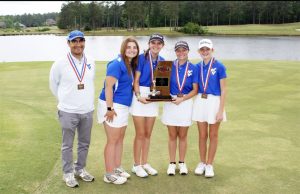 HATTIESBURG – The Water Valley Girls Golf Team is the 2021 Mississippi Class II State Champions, finishing three strokes ahead of district rival New Albany. Team members  Sydney Epes, Parker Avant, Chloe Clement and Bethany Pryor shot a two-day team score of 366 to come out on top of 10 other 3A and 4A schools in the competition. They are the first girl’s athletic team to earn a State title in the school’s history (the cheer team won a state title in the early 2000s).

The team ended the first day of play on April 27 seven strokes behind current District Champions, New Albany, but dropped the hammer on the second day and finished atop the leaderboard.

Coach Michael Howland praised the girls for their resilience and grit.

“I told the girls that in all my years of coaching, I had never seen a team do what they had done,” the coach reported about the second day of competition when each player lowered their score.

“Their play was a testament to their toughness and willingness to work hard to achieve their goals. Today was a day that you dream about as a coach, not for the win, but to see your players realize and embrace that they are as good as I’ve always known they were. I couldn’t be prouder of them.”

“This team has overcome so much, with Covid canceling the whole season in 2020. I’ve been fortunate to have Sydney (Epes) play for me since she was in junior high and she had grown so much as young lady and a player. She is the hardest worker and never leaves any stone unturned in trying to shoot lower scores. She will play at the next level and the sky is the limit to what she can accomplish. Chloe (Clement), Bethany (Pryor) and Shannon (Sparks) joined the team after I took a year off from coaching, but it has been a joy to be part of their growth this year. From day one, I could see their potential and they have played up to the expectations. They have improved each day and each tournament and their hard work culminated at State. Their stellar play really anchored the team. Parker (Avant) is the newest member of the team, and as a 7th grader, will be a star for years to come. She was instrumental in our team success and, along with Sydney, provided the consistent play we needed to win. Parker reminds me of Sydney at that same age and their fierce competitiveness is something that you can’t teach. The best part is they all developed a killer instinct this year and, coupled with the resilience and grit they got from parents, makes me excited for the good things that they will accomplish going forward.”

In other golf news, the Water Valley Boys will be playing in the 3A State Golf Tournament on May 3rd and 4th, at Hillendale Golf Course, in Corinth.

Store Robberies Were Easily Solved; Apprehending Scott – Not So Easy

Family Dollar Is Hiring For New Store In WV