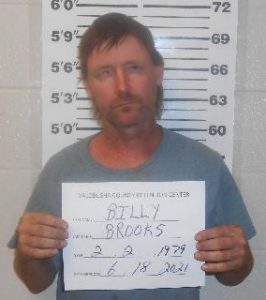 Brooks, 42, was charged with first degree arson on June 18, charges that stem from his alleged involvement in the Dec. 26, 2020 fire at a mobile home at 12 Pat Drive. Firefighters discovered the body of Kristina Michelle Jones inside the burned residence. Jones’ sister-in-law, Ashley Henley, was murdered outside the same residence on June 13. Brooks lives across the street from the home.

Assistant District Attorney Steve Jubera reported that Brooks’ charge will be presented to the grand jury. The grand jury is scheduled to meet in September and again in December.

Brooks’ arrest was a result of the combined investigative efforts of the Yalobusha County Sheriff’s Office, the Mississippi Bureau of Investigation and the State Fire Marshall’s Office. Sheriff Mark D. Fulco reported that the investigation into the deaths of Jones and Henley continues.

“As the investigations develop, information will be released as appropriate,” Fulco told the Herald.

Law enforcement officials have not commented on a possible link in the homicides.

Watermelon Metropolis Of The World