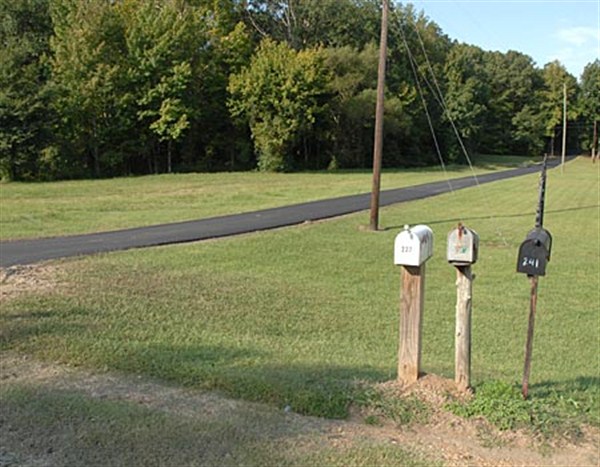 Eleven city streets including this thousand foot stretch, known as Brown Drive or Holt Drive, were paved last week. The paving work is part of the city’s continuing program of maintenance. – Photo by Jack Gurner


WATER VALLEY – Eleven streets got a coating of asphalt last week as part of the city’s continuing program of maintenance.
And, anytime there’s paving, there is usually a little controversy stirred into the hot mix.
Reports that the city had paved a private driveway off Dogwood Drive reached the Herald beginning Friday morning and continued through the day and into Monday.
But, the thousand-foot stretch in question – known as Brown Drive or Holt Drive depending on the map – is a city street, according to Mayor Larry Hart. He said that when he was street commissioner during the late 1980s, Breck and Carol Brown deeded the property to the city.
He added that the street was in line to be paved. “We have our list as to what (street) needs it the worse.”
The list is put together from recommendations made during meetings between the mayor and Street Department Superin-tendent Mike Scroggins, who is constantly on the streets in his job. “He and I get together and determine what streets really need some work. And, we didn’t quite get them all.”
And, citizens aren’t always happy if their street isn’t picked. “You aren’t always going to convince everyone that you are trying to do a balanced piece of work,” said Hart.
At one time the city could do more preventative maintenance, he said, but with asphalt going from $35 per ton “laid in” to over $100 per ton installed, now it’s doing “what’s got to be done.”
The 10 other streets paved last week along with Brown Drive include Depot Street, located on the west side of the Cemetery; Daniels Drive from the south entrance of Davidson Elementary School to Mills Street; Railroad Street south of Blackmur Drive; Pate Street; Walnut Street; Grafton Drive; Lee Ann Drive; Cook Street; Fairview Drive and the portion of South Street north of Blackmur Drive.
“We got most of the ones that are pretty desperate,” Hart added.
There are some streets in town that are in bad need of paving, the mayor said, but are too narrow for the equipment normally used by the city’s long-time paving company, Lehman-Roberts. An example cited by Hart is Sissell Street that runs south off of Dupuy and goes into the wastewater treatment plant.
The city has an older paving machine  that will fit on some of the city’s narrower streets, but it is not working at the moment. Hart added that Street Department Superintendent Mike Scroggins is attempting to repair it.
The cost of paving is included in the city’s annual budget and officials advertise for bids on asphalt each year.