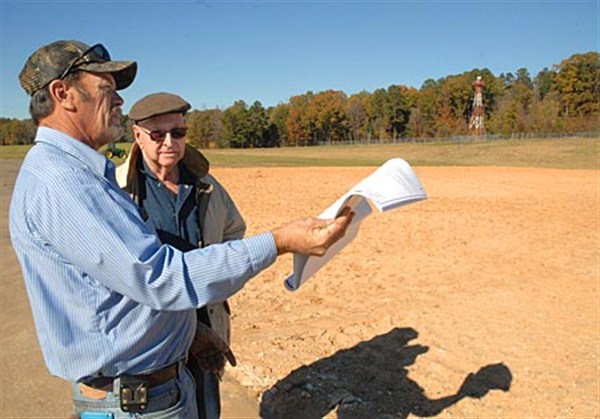 Checking The Plans – Dirt work for the city’s T-hangar at the municipal airport has been completed, Mayor Larry Hart said at the Nov. 6 board meeting. Here Jack Gurner Sr. is shown where the hangar will be constructed by Street Department Supervisor Mike Scroggins, who serves as airport manager. Gurner, a retired electronics technician, has volunteered his expertise with electrical projects at the airport. – Photo by Jack Gurner


WATER VALLEY – Aldermen have set the rental rate for space in the city owned hangar at the municipal airport at $75 per month.
That action was taken during the regular “first Tuesday” meeting on Nov. 6 after Mayor Larry Hart outlined the progress made on construction of the T-hangar. He said that the dirt work had been done and the contractor was ready to begin.
“That project is moving along,” the mayor said. “I’ve had some inquiries about rental out there.”
He added that City Clerk Vivian Snider had researched rental rates in our area and found that Batesville rents their hangar space for $150 per month. But, they have fuel and a lounge area. Calhoun County rents their space for $50 per month, Pontotoc rents theirs for $68.75 and Winona is $100.
“We would recommend to you that we set that rental at $75,” said Mayor Hart. “Since at the present time we don’t have fuel accommodations nor a lounge building.”
He continued that someone interested in renting space had contacted the city. “I want us to go ahead and agree on the rental so we can get these people lined up and be ready to go when we complete the building.”
Alderman Larry Bell said that two individuals who are interesting in leasing property at the airport had contacted him. Both were interested in building their own hangars on the leased land. He gave the mayor a lease agreement that he had gotten from Batesville airport officials along with information from other airport managers.
Mayor Hart said that he would take the information and work with it for any future leases.
Among other actions at the November meeting, aldermen:
• Heard a report from Main Street Director Mickey Howley, who told aldermen that four local artists had been invited to attend the Mississippi Development Authority Asset Mapping annual meeting in Tunica. He said that the artists would demonstrate the Water Valley creative economy in action.
Howley also noted that the Main Street Association and the Chamber of Commerce were co-sponsoring a shop local promotion, the Christmas in the Valley Holiday Open House, which took place this past weekend.
Mayor Larry Hart noted that the Water Valley Main Street Association was now five years old. He held up an award presented to the City for “Steadfast Support” of the program and asked Howley to tell about the wood from which it was made.
Howley explained that the award represented “rock solid” support of city officials for the program, which is a public/private partnership. “And that’s why it’s working.”
He added that the wooden base for the award was made from a true 4×4 that came out of a downtown building. The piece of wood represents internal structure, he said. “It is really what holds the building up and keeps it stable and we feel that is a metaphor for what the City has done for the Main Street organization.”
The mayor thanked the WVMSA and said, “We’ll continue to support you and appreciate the work that you guys are doing.”
• Accepted an $118,688 garbage truck bid from Pac-Mac of Bay Springs for a 2014 Freightliner chassis with a Pac-Mac garbage compactor mounted on it.
• Agreed to purchase a 1500 kVA three-phase, pad mount transformer at the quoted price of $18,381 from Four-Way Electric, Inc. of Greenwood. The unit is to be installed at the “spec” building site on the old Bondafoam property across from BorgWarner.
• Voted to advertise for bids for both the bank depository and culverts.
• Authorized Police Chief Mike King to research the purchase of a new police car at state contract price.
• Made the municipal compliance questionnaire part of the city’s official record.
• Learned the city’s schedule for the two upcoming holidays: Veterans Day (Monday, Nov. 12) and Thanksgiving (Thursday, Nov. 22 and Friday Nov. 23).
• Entered executive session to discuss a personnel issue.
• Returned to regular session and announced that Brandon Magee had been hired to work in the electric department.
• Adjourned after meeting for 24 minutes.