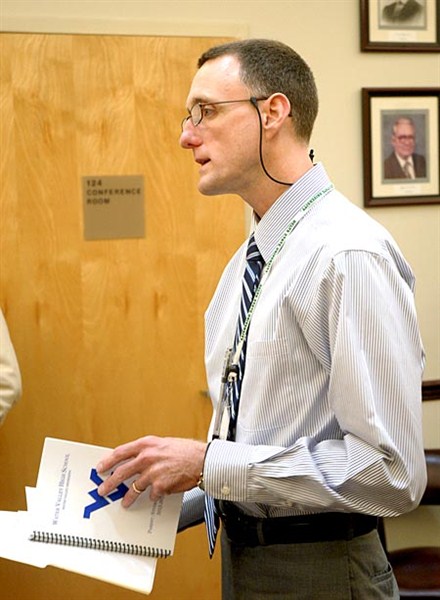 Dr. Glen Kitchens brought a parent’s concern over the WVHS dress code to school board trustees. 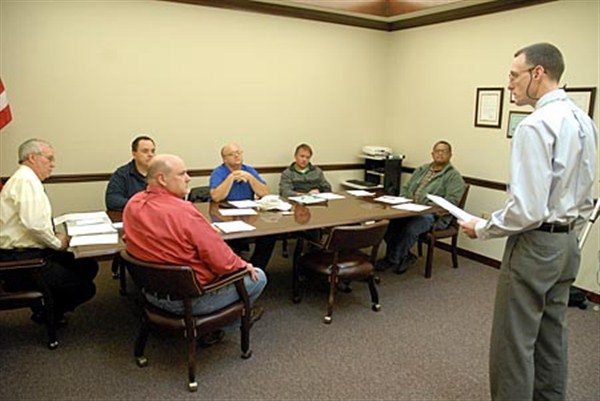 
WATER VALLEY – The complexity of interpreting and enforcing the high school dress code was brought home to the district board of trustees because of jeans with holes.
WVHS Principal Dr. Glen Kitchens told board members at their regular meeting Nov. 5 that he was speaking on behalf of a parent with whom he had an extensive meeting. He explained that her child had been sent to the office over a dress code violation.
The parent sent someone to pick up the child and then the parent and child returned to school together. They brought a change of clothes, but the child came back dressed as she was because the mother felt that school officials were being unfair and not interpreting the handbook correctly.
“We met for a considerable length of time,” Dr. Kitchens said and explained that by the end of the conversation, the parent had concerns that she wanted brought before the board.
One of the questions was about item number 16 on page 48 of the student handbook, which Dr. Kitchens read aloud: “Current styles in jeans with frays and rips are fine provided no skin or undergarments are showing between the waist and mid-thigh.”
The parent’s question was about undergarments and the spirit of the handbook, Dr. Kitchens continued, which she understood was to – quite simple – promote decency. “And have decency among the students at the school with regard to their dress.”
“We have through this year viewed anything that could be seen through any type of rip or fray or hole, or whatever it was, above mid-thigh…we viewed any of that as an undergarment.”
Dr. Kitchens then gave a lengthy description of jean’s style factoring in various formats of rips and tears to help the trustees understand the latest fashion trends.
He said that the parent pointed out that the exposed clothing under the jeans was not an undergarment, but a type of sports pants. “You’re calling an undergarment something that is not an undergarment,” Dr. Kit-chens quoted the parent as saying. “My daughter is really not out of your dress code.”
The parent noted that her daughter was missing class and she, the parent, was taking up Dr. Kitchen’s time. “We’re sitting her discussing something that we shouldn’t even be discussing,” he quoted the parent.
“She said we take a lot of pride in making sure that we follow guidelines and we check our children. ‘I knew how my daughter left the house. I would have sent her anywhere in that,’” said Kitchens, who added that he would have taken her to church. “She was completely covered and decent.”
“The mother’s concern was that if she is decent ‘then why are we sitting here?’”
Kitchens said that the parent understood that he would be meeting with the board to get some guidance on the issue. He then read a brief statement from the parent, “Decency is the question at large. The principal needs to determine if the student is decent and then move on with the school day.”
He added that the parent wanted her concern and her displeasure shared at the top level. “The bigger issue was that her child felt like she was being told she was indecent.”
“Why did we send her home?” questioned board member Taylor Trusty.
“Because there was garment visible through those holes,” answered Dr. Kitchens.
“I understand what you are saying,” Trusty responded. “But, you are the ultimate interpreter of those rules. If you decide that’s decent then it is our job to back you up.”
Trusty commented that every attempt had been made to cover the issue in the handbook. But, ultimately it is a judgment call. “You are the ultimate judgment call at this campus,” he told Dr. Kitchens.
“If you felt like it was decent, then I have to wonder why did the girl go home?” Trusty asked.
“Because the question wasn’t decency in my mind,” Dr. Kitchens responded. “It was the handbook.”
“I’m not the one to start trying to figure out whether a 14-year-old girl has on an undergarment or not,” he added.
Dr. Steve Edwards said, “If there is a garment under there and that garment is showing, then it’s an undergarment.”
As the discussion continued, School Board President Lamar Burgess said, “What you are describing and what some parents need to understand is that there are a lot of items being sold that are not appropriate for the school setting.”
The subject of decency came up again and Trusty asked if there was anything about decency in the handbook.
“No,” replied Dr. Kitchens. “The spirit of even needing to have a dress code is to try to provide decency…to try to have a decency among the dress of the entire student body.”
At the end of the discussion Dr. Kitchens asked, “Are we in support of anything that is under there that is not attached being considered an undergarment or do I need to determine decency. I can live either way.”
After a few more minutes of discussion, Casey Washington said that the students had requirement to meet to come to school. “I’m prepared to go with Mr. Burgess. I’m ready to institute a uniform if they can’t dress by what we give them (in the handbook).”
Dr. Edwards added, “You shouldn’t be given the burden of trying to determine what an undergarment is.”
Dr. Kitchens ended the discussion by asking if the board understood what the parent was trying to say. “If we’re calling that an undergarment, we’re not abiding by the spirit of what we are trying to accomplish,” he said. “It’s really that simple with her and she wants that changed.”
“It won’t get changed tonight,” he added. “But, it may be addressed clearer and better in the coming handbook. We’ll continue to operate the high school like we have. I’ll share that with her (the parent) and if we (school officials) determine that we need to rewrite for the coming year, then we’ll do that.”