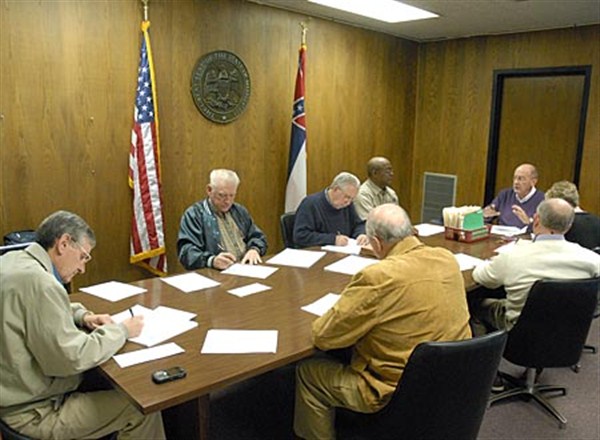 
WATER VALLEY – Staff members from Mississippi’s Welcome Centers will be in town March 26 to look over the city’s tourist attractions.
About 25 people are expected, Mayor Larry Hart told aldermen at the first-Tuesday city board meeting on March 5. “They want to see our three art galleries and some of our restaurants and eating places,” he added.
Welcome Center staff are often the first contact travelers have when they come to Mississippi and ask what there is to do and see while visiting, according to the Mississippi Development Authority Tourism Division.
While here the group is also expected to tour the Water Valley Casey Jones Railroad Museum.
Mayor Hart was reading from the Main Street Association report normally presented by Mickey Howley, who was out of town.
Additionally from the report, the mayor noted that also on March 26, Main Street Association managers from about 20 towns in north Mississippi will be in town for a regional meeting, which will take place upstairs at the BTC Grocery building in a room once used as a Masonic Lodge.
“That’s going to be a lot of people in town that day,” Hart said.
The mayor also reported that on March 16 the Arts Council will have their Green Gala of Yalobusha at Bozarts Gallery. The event is a continuation of the annual “Come As You Aren’t” costume parties and will raise funds for the Summer Art Camp for Kids.
Looking ahead to May, the Main Street Association is planning the third annual World’s Largest Crappie Festival for Saturday, May 4.
“BorgWarner is sponsoring a 5K run and a two mile walk to start off the festival and the Magnolia Crappie Club is sponsoring a fishing tournament that day at Enid Lake,” Hart read. “The weigh-in will be downtown.”
Among other actions at the March 5 meeting, aldermen:
• Approved two changes orders on the city’s construction projects. The first is on the airport hanger to install three-inch insulation on the interior walls at a cost of $2,168 and to enclose the “dead corner” to create a storage space, 12 feet by 23 feet, at $4,787.
The second set of changes is to the “spec building” on the former Bondafoam property across from BorgWarner. Two ceiling fans will be installed for $14,983, the mayor said. “I’m not gonna’ tell you the brand name of them. They’ve got an unusual name.” said Hart with a grin, referring to the “Big Ass” brand fans.
“They’re 18-footers and they will move some air,” he said.
Also to be installed in the spec building are four, 250,000 BTU suspended heaters for $9,105; three five-by-five concrete stoops and canopies for the three exterior doors for $4,950; gas piping for the heating at $4,991; air piping at $14,857. “That’s a total change of $48,886,” said Hart.
• Paid estimate number three on the spec building to Goodwin Construction Company for $110,110.51 and Willis Engineering for $6684.
• Heard that the city will take the Good Friday holiday March 29.
• Adjourned after meeting for just over 11 minutes. The next regular meeting is scheduled for Tuesday, April 2, beginning at 6:30 p.m. in the boardroom at city hall.