The spotlight shines on Heather Gray as she carries the flag during the National Anthem as part of the opening ceremonies in the Bulls & Barrels Bonanza last Saturday. The fundraiser, sponsored by the Water Valley Rotary Club, was a sellout. Gray is the daughter of county agent Brent Gray. – Photo by Leigh Rounsaville 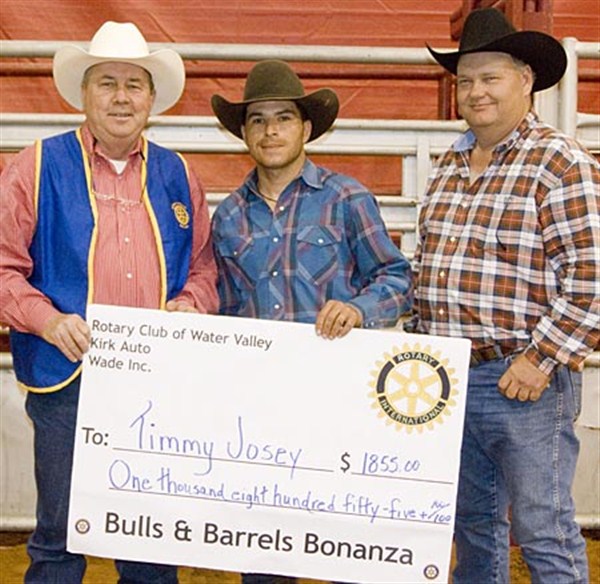 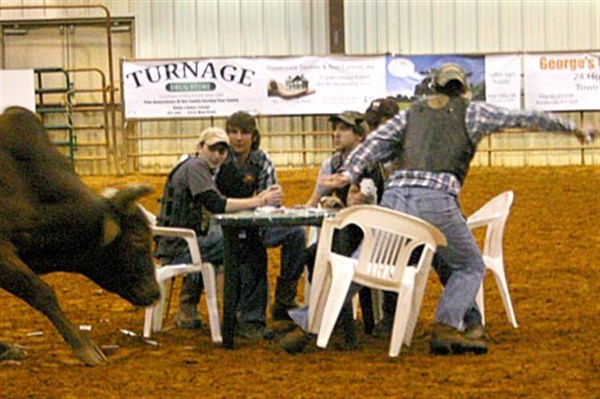 Horning In – It took nerves of steel to remain seated during a friendly game of bull poker in Saturday night’s Bulls and Barrels Bonanza. Leigh Latham had to make a hasty exit from the game as the bull targets him. The remaining four players split a $250 pot after the bull lost interest in the game. Thankfully the chair (below) was the only casualty as the bull comes down during the second round of bull poker. – Photos by David Howell 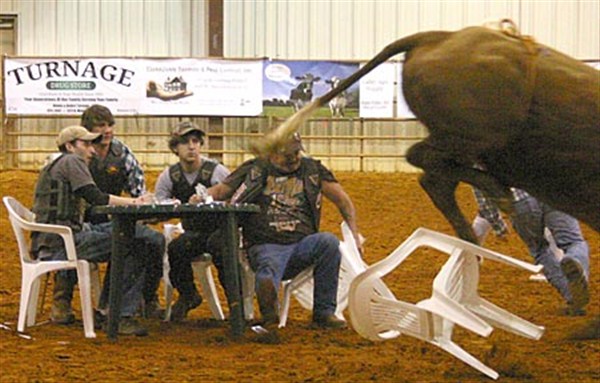 
COFFEEVILLE–Rodeo fans from Yalobusha and all around packed the Multi-purpose Building Saturday to enjoy an action-packed Bulls and Barrels Bonanza.
Timmy Josey of Baton Rouge took first place out of 25 bull riders, scoring 86 points in the long round and 75 points in the short round. Michael Crenshaw of Hernando took second place and was the only other bull rider to stay on for eight seconds in both rounds. Crenshaw scored 76 in the long round and 65 in the short round.
Jon Mastrangelo of Coffeeville took third, scoring 90 points in the short round that was the best ride of the night. He was among a half dozen cowboys randomly drawn to ride in the short round after not enough riders stayed on during  the long round to advance to the short round.
Quality bulls could be blamed for the limited success of the bull riders–only eight riders were able to stay on a full eight seconds during the night.
Which is a good thing, explained Ross Burney who helped coordinate the event.
“The riders were happy with the bulls,” he told the Herald.
The action also kept the crowd on the edge of the seat throughout the night in the sellout event as cowboys went flying through the air–one after another.
The event was a fundraiser for the Water Valley Rotary Club and the members invested tons of hours in the event.
“It was a learning experience for all of us,” reported Rotary President Daryl Burney. “Hopefully it is something we can build on in the future.”
Daryl Burney, county agent Brent Gray and Ross Burney ramrodded the event.
Ross Burney has traveled the country riding bulls and used his connections to help bring some of the big-name riders to the event.
Gray has been involved in producing rodeo events all of his adult life and has also judged rodeos for the last seven years.
“It was probably one of the bigger events that has ever been held at the building and it’s something that we want to make an annual event,” Gray said about Saturday’s success story.
Like Ross Burney, Gray was particularly pleased with the bulls.
“A few of the top riders there are top ranked in the world,” Gray said. “And they didn’t stay on long, they were just on a good bull, hard to ride.
“Chance (Smart) has been to the big dance twice and he only stayed on for a few seconds,” Gray added.
Lauren Sanders won the barrel race that was held earlier in the day with a 15.1 second time.
One highlight of the night was the anticipated bull poker. The game started with seven players crowded around the table with a hand of cards.  In this game, the cards do not determine the winner, instead a bull enters the arena and the last man sitting at the table wins the $250 pot.
When the first bull came out, two of the players immediately bolted. The bull made a few rounds, but lost interest and another bull entered the ring to  liven up the game.
This one made a dash for the table, splintering the cheap, plastic chair that Leigh Latham had occupied only a moment before.
“Folks, you won’t take that chair back to Fred’s and get your money back,” the announcer joked.
Like the first bull, the second one also lost interest in the game and the pot was split between the remaining four players.
The poker game would have been faster and less successful if one particularly mean bull nick-named “Circuit Clerk Jerk” by Ross Burney had joined the game. Working in the short round, the “Jerk” quickly jerked off Jace Smith of Florida and then let everybody in the arena know he meant business. The massive bull circled the area, scattering judges and others clinging to the metal fences enclosing the show as even the clowns appeared wary of the wild-eyed beast.
Several riders took some good licks  during the night but only one rider, Michael Crenshaw of Hernando, appeared to need medical attention. Crenshaw had a bull step on his leg after his second successful ride. He was down but when EMT Ronnie Stark–who also serves as the county’s duly elected coroner, came with the stretcher–Crenshaw miraculously got up and limped back across the arena.
Gray estimated the head count at more than a 1,000 people–counting the crowd, riders and support personnel.
“This may lead to other high-caliber shows,” Gray said. “I have already had several people ask me about having other big events at the Multi-purpose Building.”