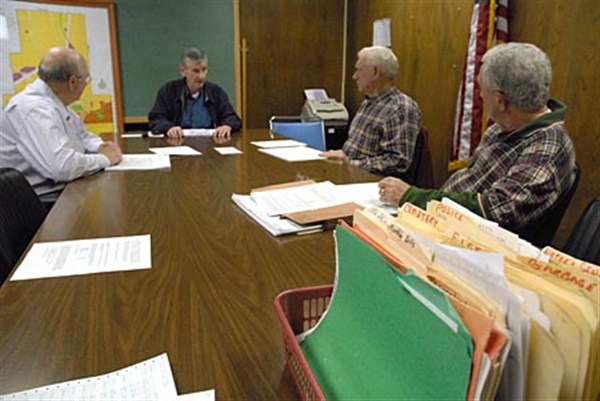 Aldermen (from left) Phillip Tallant, Donald Gray, Larry Bell and Bobby Cox chat before the beginning of the “first Tuesday” meeting. Alderman Fred White is present, but out of frame to the right. In the foreground is City Clerk Vivian Snider’s board meeting tray of paperwork.


WATER VALLEY – The city’s creative economy will be featured at the National Main Street Association Conference April 14 in New Orleans.
Main Street Association Director Mickey Howley said that the Mississippi Development Authority, Mississippi Arts Commission and Mississippi Main Street have an opening panel session that will feature Water Valley. “Four people from Water Valley will represent us on this national stage,” Howley added.
According to the Development Authority, Mississippi’s creative economy employs around 63,500 people in job sectors ranging from design to culinary arts to museums and heritage. Water Valley has recently been highlighted in several national publications for its downtown revitalization and preservation efforts through its creative entrepreneurs.
Among other items from Howley’s report April 2 at the first Tuesday meeting of the city board, the Main Street Director noted that the annual Crappie Fest would be held May 4. “The Main Street Association is working with a big sponsor, BorgWarner, and also the Magnolia Crappie Club,” he said.
Howley continued that the group would be sending three people to Louisville for three days, May 15-17, to participate in the “Your Town” project. The event is sponsored by the John C. Stennis Institute of Government at Mississippi State University.
“It’s for training on how to get things done,” he said. “It’s helped our organization in the past.”
Next, Howley said that the Farmers Market would open for the new season “probably about the third weekend in May depending on how the weather goes.”
“We don’t have a set date on that. We’ve always waited on that until we hear from our regular vendors,” said Howley.
Finally, he reported that nationally known retail expert Margie Johnson would be in the city sometime between June 3 and June 5 as part of a visit to the state sponsored by Mississippi Main Street.
“She’s going to help out some retail merchants in town with advice on store front displays and advertising,” Howley said.
Among other actions at the meeting, city aldermen:
• Reappointed Dolly Henderson to another five year term on the Housing Authority Board of Direc-tors. She will complete 25 years of service in May.
• Moved about 20 Electric Department accounts worth just over $5000 from the active file to the delinquent file. “We continue to pursue collection of these,” said Mayor Larry Hart.
• Approved estimate number three to Wright Steele Erectors of Clarksdale for a $129,554.59 payment for work on the Airport Hangar project. The engineering costs approved for Willis Engineering were $14,640.
• Adjourned at 6:44 p.m. after meeting for just under 10 minutes from the start time of 6:34 p.m. The next regular meeting is scheduled for Tuesday, May 7 in the boardroom at city hall.