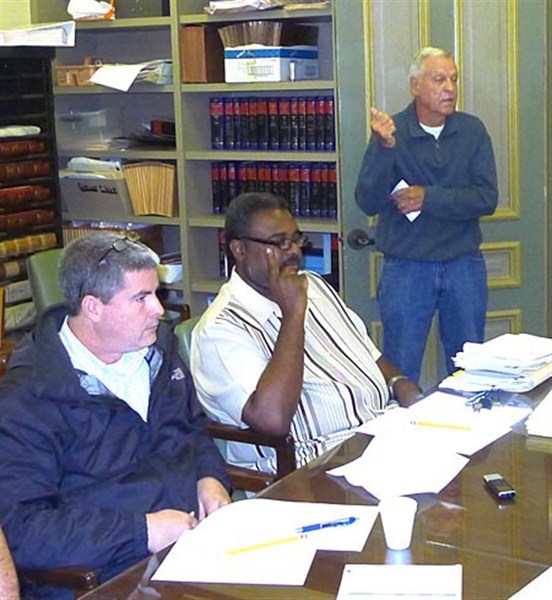 Lawrence Hamilton (standing) told supervisors he did not want a garbage can. His concern wasn’t the $13 monthly fee, instead he didn’t want the can in his yard.


WATER VALLEY – The first item in the first supervisor’s meeting of the month started with a complaint about garbage in the county.
This time the complaint wasn’t service related, instead Lawrence Hamilton told supervisors that he had never had a garbage can and doesn’t need one now.
Hamilton is apparently one of dozens of Yalobushians who had been inadvertently skipped as a garbage customer. Like others, this oversight was discovered when Waste Management supplied new cans to each resident in the county in March.
“I been there 20 years and I never had a can until this thing changed over,” Hamilton told supervisors Monday. “It’s the only service I have that I can’t cancel, it’s not fair.”
Board Attorney John Crow explained the county’s legal obligation regarding trash pickup, a role he has performed before.
“The State of Mississippi says, if you generate so much as a gum wrapper, we got to pick it up,” Crow explained. “And we don’t have any choice. The state can fine us $25,000 a day,” Crow explained.
Monday’s a complaint comes a little over month after Waste Management began picking up trash in Yalobusha County on April 1.
The transition has not been without problems and supervisors outlined concerns during a conference call held in a recessed meeting on April 23 with Waste Management officials.
Part of the problem stemmed from new drivers and employees hired by Waste Management who were still working to become familiar with the routes.
Another factor identified by Waste Management was the number of homes in the county that do not have a 911 address properly displayed.
During an informal lunch meeting held last Thursday with several county officials, Kenneth Wicker reported fewer and fewer problems. Wicker is the site manager for Waste Management’s Grenada office and is responsible for Yalobusha County garbage pickup.