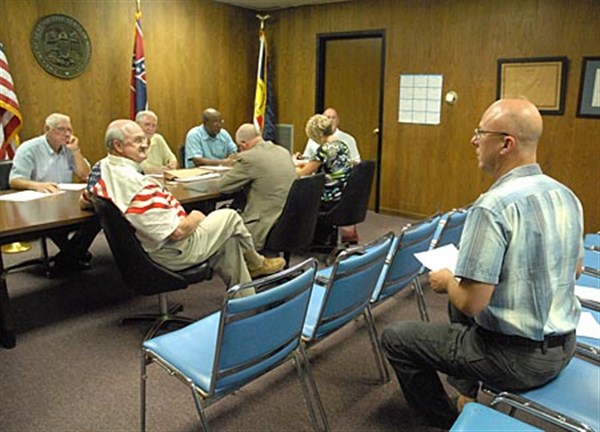 Mickey Howley (right), Director of the Water Valley Main Street Association, present an upbeat report to the mayor and board of aldermen during their regular first Tuesday meeting July 2. – Photo by Jack Gurner


WATER VALLEY – It’s Watermelon Carnival time again and Mayor Larry Hart made the first official announcement at the first Tuesday city board meeting July 2.
“Unless we have a called session, we won’t meet again until after we’ve had the Watermelon Carnival,” the Mayor told aldermen. “It’s the first, second and third of August.”
Every year city officials remind citizens that they can help with the preparations by getting an early start on clean-up projects. “Don’t place your debris in the street, but put it at curbside,” Mayor Hart said and asked that small debris be bagged.
“Our regular brush pick-up schedule will correspond with your garbage pick-up,” he added. “But, feel free to call City Hall at 473-2431 if you need a brush pickup.”
Among other actions at the July 2 meeting, aldermen:
• Heard a report from Water Valley Main Street Association Director Mickey Howley, who said he would start with the most critical thing first, tomatoes. “That’s the most important thing I do during the summer.”
“We’ve had tomatoes the last two weeks and they have been selling out in the first half-hour at the Farmers Market. They just disappear,” he said, snapping his fingers to indicate how fast they are gone.
“Unlike last year – because of the weather – we expect to have a really good July and a terrific August,” Howley added. “So, the Farmers Market is finally picking up speed.”
He continued that several new stores have come into downtown recently. “It’s always a good thing to see buildings occupied and retail back in them.”
Howley also thanked aldermen and the mayor for their support of Water Valley’s Main Street. He noted that he and Bob Tyler had just returned from an economic development conference where it was stressed how important it is to work with elected public officials.
Finally, Howley announced that the annual Water Valley Art Crawl would be Sept. 21. “It’s a Saturday. We’ve double-checked and it’s an away game for Ole Miss. We don’t know about state.”
• Authorized purchase of a $43,350 Vermeer chipper for the electric department.
• Wrote off $5,360.90 in past due accounts from the electric department.
“That’s not just forgotten about,” Mayor Hart emphasized. “They continue to try to collect it. But, TVA prefers that it be out of their current receivables.”
• Appointed city officers including City Clerk Vivian Snider, Chief of Police Mike King, Municipal Judge Trent Howell, Public Defender Andy Arant, and Prosecutor and City Attorney, the Crow/Martin law firm John Crow and Daniel Martin.