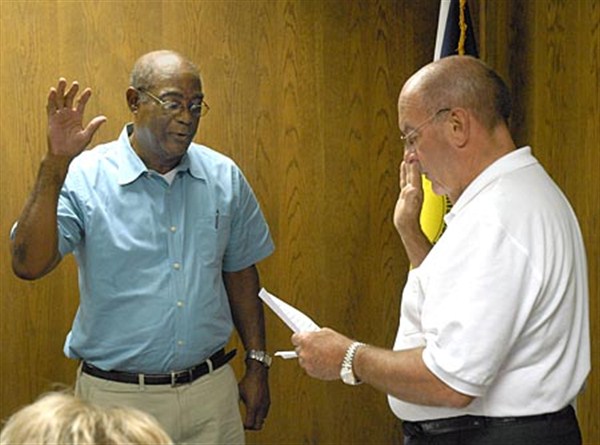 Fred White was sworn in to serve as Ward 2 Alderman until a special election can be held in August. White, who was scheduled to leave office after being defeated by Ray Hawkins in the May Democratic Primary, was appointed after Hawkins vacated the seat. – Photo by Jack Gurner 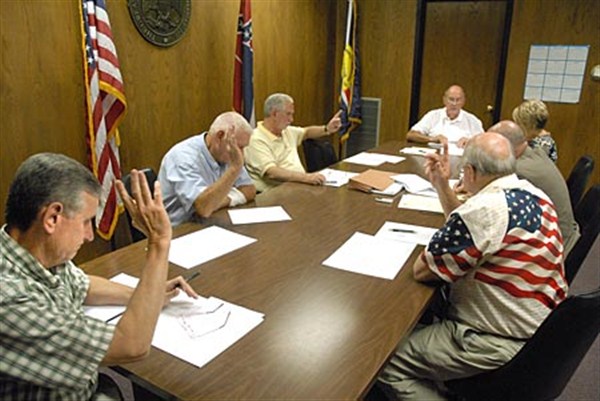 Aldermen vote to “hold over” Fred White to fill the position vacated by Ray Hawkins.


WATER VALLEY – In what Mayor Larry Hart described as an unusual situation, Alderman Fred White was sworn in to represent Ward Two at the regular first Tuesday meeting of the Board of Aldermen July 2.
Newly elected Ward Two Alderman Ray Hawkins vacated the position earlier citing “unforeseen circumstances that could possibly put my current full-time employment in jeopardy.” Hawkins currently serves as assistant police chief at the University Police Department at Ole Miss.
Hawkins met with Mayor Hart June 28 and turned in a letter to be read into the city board meeting minutes vacating the Ward Two Alderman post. In the letter he requested that his spouse, Kathleen Hawkins, be appointed to serve in the position until a special election is held.
The letter is reproduced below.
Hawkins had defeated White, 63-54, in the May Democratic Primary Election. Only 117 votes were cast out of 469 registered voters in Ward Two. Just four years ago, White was unopposed and got 145 votes in the Democratic Primary Election.
At the meeting Tuesday night, Mayor Hart read the letter from Hawkins and then asked John Crow of the Crow/Martin Law Firm, attorney for the board of aldermen, to explain his research into what action city officials should take.
Crow explained that according to Mississippi Code all officers elected at the general municipal election shall take office on July 1. “And shall hold their office for a term of four years and until their successors are duly elected and qualified.”
Crow continued that since one of the aldermen would not take office, it is the job of the board to declare a vacancy in Ward Two. Further, the board must order an election since there is more than six months left in the term.
Crow noted that Fred White was the duly elected alderman prior to this term and by section 21-15-1 of the Mississippi Code remains in office until his successor is duly elected and qualified. “So, he is what you call a hold over alderman from last term.”
Aldermen voted unanimously to declare the office of Ward Two alderman vacant, set the election for Tuesday, August 13, and hold Fred White over until someone is elected or appointed.
“The reason we say ‘appointed’ is in case no one announces to run and we wind up with no candidate,” said Mayor Hart. “We would appoint at that time. But, I am aware that there are those considering running.”
The mayor then asked White to come forward and be sworn in so he could conduct business. At the end of the oath, Mayor Hart shook White’s hand and said, “May God bless you.”
“An unusual situation to say the least,” Mayor Hart said as he thanked attorney Crow for providing guidance in the matter.
The mayor continued that he and City Clerk Vivian Snider were working on a map of Ward Two for publication in the Herald “to define those boundaries.” (See Page 12 in the PDF edition)
There were a few problems during the May primary with voters who didn’t know which ward they lived in.
Ward Two voters will cast their ballots at the Water Valley Courthouse, Mayor Hart added.

It is with great regret that I inform you, I will be unable to serve the citizens of Water Valley as Alderman Ward II. It was brought to my attention, recently, that serving in this capacity could compromise my position with the University of Mississippi Police Department.
I was unaware of this prior to qualifying and announcing my candidacy, and only learned of it when a close friend, in a similar situation, brought it to my attention.
I was looking forward to serving the citizens of Water Valley and bringing new ideas and energy to the city and Board of Alderman. I owe a debt of gratitude to the voters who supported me and gave me their vote of confidence; I apologize for not investigating this thoroughly before announcing my candidacy.
I still plan on being active in the community and if I can ever be of service, in another capacity, please don’t hesitate in calling.
If an appointment is made until a permanent solution is derived, I would like to request that my spouse, Kathleen Hawkins, be appointed to serve in the vacated position.