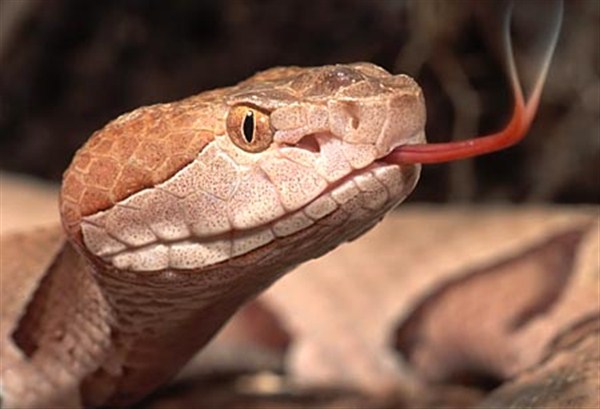 
WATER VALLEY–A Water Valley attorney was not seriously injured after being bitten by a copperhead last week. Although it didn’t take long for the snake-lawyer jabs to follow, John Crow has been good-natured about the publicity.
“I have gotten all the lawyer jokes, my preacher said he didn’t know that snakes would bite lawyers,” Crow said. Another jab adds that Crow was okay, but the snake died. Or this proves lawyers are not affected by snake venom.
It could have been much more serious. Crow said he was  lucky that the snake only connected with one fang and injected only a small amount of venom when it bit him on the back of his heel. He was out of the hospital in a couple of hours.
The incident occurred last Thursday when he was checking on his tomato plants behind his house and he likened the bite  to a wasp or bee sting.
“I looked down to see where the wasp was,” Crow said. That’s when he saw the small snake, mouth open, ready to strike again.
“It wasn’t but about 18 inches long. I had walked all over him and didn’t know it,” Crow said.
He killed the snake with a tomato stake, put it in a bucket and went up to neighbor Tommy Vaughn’s house to get a second opinion on the identity of the snake.
“I think he already knew it was a poisonous snake, he just wanted to get a second opinion,” Vaughn explained last Friday at the lunch table as the story was making the rounds through Water Valley.
“I told him he needed to get to the emergency room, but he didn’t seem like he was in any hurry,” Vaughn added.
The pressure to seek medical attention mounted when Crow returned home and his daughter, Anna Gordon, and his wife, Jane, urged him to go to the emergency room in Oxford.
“My heel wasn’t swelling, I could tell I had a little puncture,” Crow said.
He gave in when he said his options were limited:  listen to them or make the trip to Oxford.
Their entry into the hospital created quite a stir when they arrived, snake in hand like he was instructed. The snake was discarded after the doctor confirmed it was poisonous and took a picture.
Crow said the hospital kept him under observation for several hours, took some blood and monitored his vital signs.
“It took about two hours before they decided they were not going to give me the anti-venom,” Crow explained.
He was released that night.
Crow said he learned several things about snakes from the experience.
“Bites from the little (copperheads) are more serious because they give you all their venom, the big ones can withhold some poison,” Crow said. He also learned snakes are more likely to be found around some water source this time of year.
He also said he will be more careful about wearing tennis shoes when working around his garden.
“I could feel it for two or three days afterwards, it was kind of like a wasp sting,” Crows added.