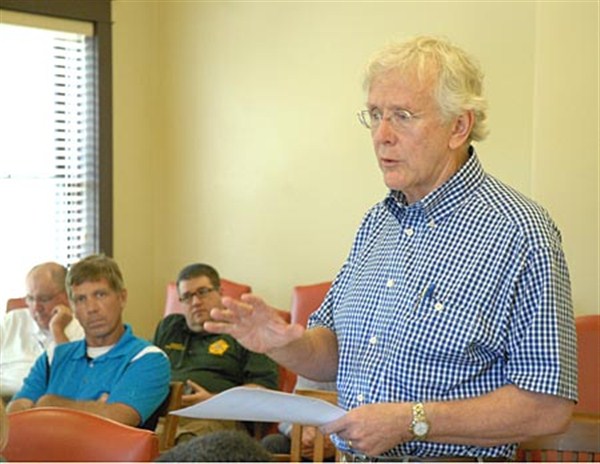 Benchmark Corporation President David Marsh breaks down the costs to construct a new county jail during a meeting with supervisors last Wednesday. – Photo by Jack Gurner


WATER VALLEY–Jail construction was back on the agenda Wednesday, August 7 as supervisors crunched numbers during a recessed board meeting.
The look at preliminary costs comes after supervisors entered a non-binding agreement with Bench-mark Construction Com-pany back in April  to design and construct a new county jail.
At last week’s meeting Benchmark owner David Marsh provided a preliminary budget for the total project, $2,715,000, based on the  amount of debt service the county could pay annually without a tax  increase, plus the amount of upfront money supervisors could use for  the jail.
The millage earmarked for debt service is available after  supervisors shifted 3.64 mills in 2012 to the jail debt service. That  millage was originally assessed for a hospital bond levy, but  hospital officials agreed to pay the last two years of the bond  payment totaling 1.85 mills, along with a 1.79 mill surplus that  came last year when the county’s assessed value increased.
Combined, the existing millage will generate around $184,000  annually and supervisors last year earmarked that money for the jail debt  service.
The $184,000 annual payment would retire an estimated $2,285,000  debt over 20 years based on a 4.95 percent interest rate.
That money, plus $430,000 the county has saved for jail construction,  was used to calculate the $2,715,000 jail budget.
Just under half of the $430,000 will have been accumulated after the millage already assessed for the hospital bond payment in fiscal 2013 and 2014 generates an estimated $200,000 that will be shifted  to the general fund.
The county also has $230,000 in a capital improvements fund   dedicated for jail construction. That money has been in savings  since 2005 and 2006, when Community Bank paid property taxes on the  old  beef plant in Oakland before Windsor Foods purchased the facility.
Although the total budget was estimated at $2,715,000, Marsh told  supervisors that up to $315,953 would be subtracted for design work,  infrastructure upgrades and other expenses (see chart).
That leaves  $2,404,047 for the actual hard construction cost of the  jail.
“It’s getting a little bit tight, but we’re okay right now. It  probably needs to be bumped up some,” Marsh reported at the meeting.
The meeting was an update from Marsh and did not require board  action, supervisors did move forward on right-of-way work for a 10-inch water line to the jail
Much of the infrastructure work, both the 10-inch water line and a sewage line that will service the new jail at the Yalobusha County  Complex located on County Road 436, will be funded using a $365,000  grant funded by the Appalachian Regional Commission (ARC). The county will be required to kick in $91,548 in matching funds for the grant.
While not finalized, the capacity of the new jail would have in the vicinity of 48-county beds, plus another possible 20 to 25 beds to house state inmates.
Sheriff Lance Hum-phreys has noted during several meetings that the larger facility could cost significantly more to operate that the current jail.