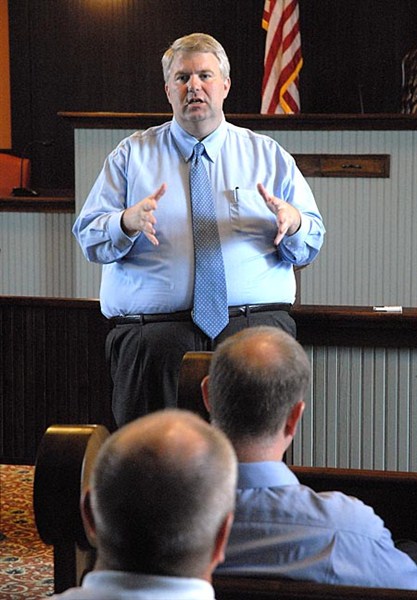 
WATER VALLEY – Small businesses in Mississippi are eligible for help with their energy bills under a cooperative program between the Public Service Commission and several major gas and electrical utility companies.
Northern District Public Service Commissioner Brandon Presley was in Water Valley last Wednesday to spread the word about the program. He explained that commissioners believe that helping small businesses is important because they create two out of every three new jobs in the state.
Presley praised what has already happened on Water Valley’s Main Street and the national publicity the town has generated that not only helps the town, he said, but the whole state as well.
He noted that small business people don’t get bailed out in Washington. “They don’t get bailed out on Wall Street. They really don’t have a lot of incentives because everybody is geared toward big employers,” Presley added. “Small businesses have been unfortunately overlooked in Mississippi when it comes to incentive programs.”
He said that the commission’s program has been in effect for the past two years and has helped 1,032 small businesses save an average of $350 on startup costs. “Those are real dollars for real folks,” Presley added.
He said that a point of pride with the commission is that there are only two states in the country that have this program, Mississippi and Alabama. And, he emphasized, the program is not only for downtown businesses, but also businesses located anywhere in the county.
Locally, the program is offered by Entergy, which covers areas on the western edge of the county, and CenterPoint Energy. Both companies offer a 15 percent discount off the base rate, Entergy for 24 months and CenterPoint for 12 months.
Entergy will accept the initial deposit in three monthly installments or, for amounts over $2000, a letter of credit in lieu of deposit. CenterPoint Energy will reduce the initial deposit by 50 percent or accept a letter of credit.
Requirements to enroll include that the business must be located in a building that has been vacant for the past six months and it must have HVAC equipment. CenterPoint Energy excepts new or expanding businesses that require another meter. Entergy only accepts new businesses.
The program currently runs until the end of this year, but Presley said he wants to continue the incentives through 2014. Additional information is available at the Public Service Commission website at: www.psc.state.ms.us. Entergy can be reached at 1-877-ETR-BIZZ (877-383-2499) and CenterPoint Energy’s website is www.centerpointenergy.com