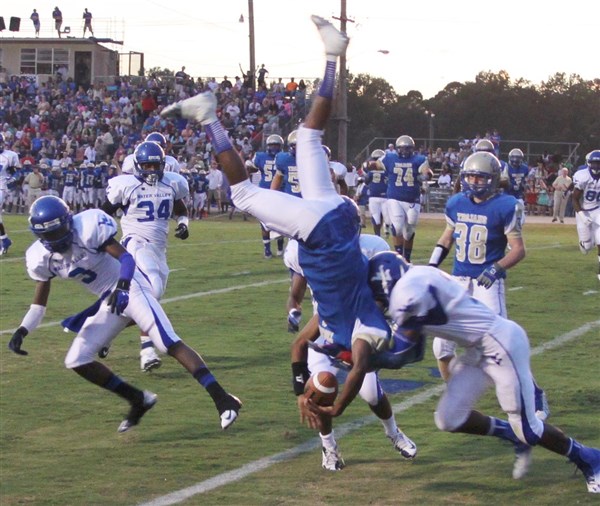 Flipping Into The Endzone – T.T. Person (photo below) can’t stop Bruce from scoring on their opening drive as a Bruce player crosses the goal line in the air. Just as he crossed into the end zone, he was hit again by Kirkland Horton (photo above) as he cuts a flip and hangs on to the ball. Both the Trojans and Blue Devils scored on their opening drives Friday night at Trojan Field. – Photos by Dawn Mack 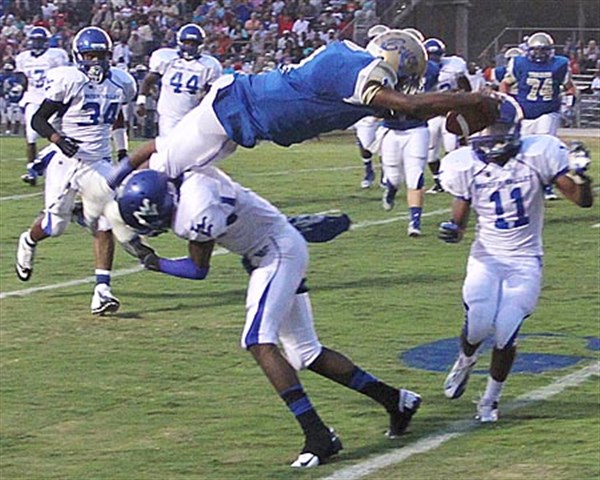 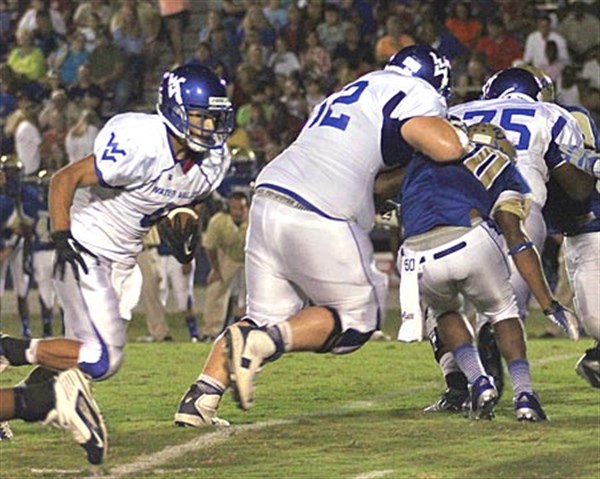 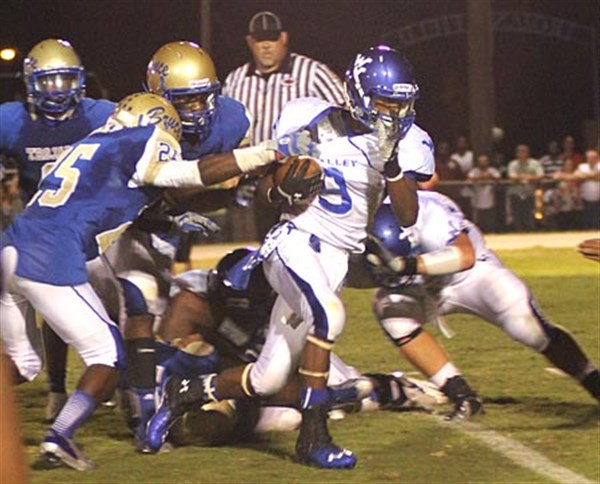 
BRUCE–After cruising through three consecutive wins, the Water Valley Blue  Devils (4-0) pulled out a narrow victory that came down to the last seconds of the game at Bruce High School (3-1) last Friday.
The Blue Devils were up 14-7 at the end of the first half of play and looked to be in the driver’s seat, but the team  recorded two fumbles in consecutive kickoff returns in their first two possessions in the second half. The turnovers would keep the Water Valley defense on the field for much of the second half, and push the wrecking crew to their limits as Bruce threatened to score on their final drive before they were stopped at Water Valley’s 10 yard line with only 10 ticks left on the clock.
That stand would propel the Blue  Devils to a 22-16 victory in a rivalry in a packed stadium where bragging rights were on the line as Embry coached his team to  a win in the same field he played on during high school.
“We like to go to work Monday with a win,” Embry said as his team was preparing for practice this week. “They have a good football program. To beat them on their field, it’s a good win,” Embry said about the close game.
“We’ve got to get better,” he added as division play is only three games away against top-ranked Charleston.

First Half
The first half of play was reminiscent of last week’s game against Calhoun City, as Bruce’s only  score would come on their opening drive after the home team would go 57 yards in 10 plays to find the endzone and take an early lead.
The Blue Devils would respond with an 80 yard drive  that culminated with a one yard run by senior quarterback E.J. Bounds. An extra point by Robles would  tie the game with just under half of the first quarter in the books.
The next series of plays would be less productive for both sides.
The Trojans would go three-and-out, punting to Water Valley. A chop-block personal foul against the Blue Devils would jeopardize Water Valley’s drive and they would  be forced to punt, facing 4th and 20 from their 16 yard line.
Bruce would start their next drive on their 39 yard-line and again be forced to punt after three  plays.
After a short punt, the Blue Devils would march 51 yards for their second touchdown of the night. A 15 yard pass to L.J. Hawkins and  quarterback keeper by E.J. Bounds on fourth and five kept the drive alive as  the Blue Devils looked for their second score. The eight-play drive would culminate with a 10-yard run by Elijah Rogers as the Blue Devils went up 14-7, with Robles’ successful P.A.T.
Neither team would be able to put points on the board as the remainder of the second quarter ticked down.

Second Half
While turnovers had been minimal in earlier games, the Blue Devils ball control in the third quarter almost proved too costly to overcome. A fumble on the opening kickoff of the second half gave Bruce a short field to try and tie the game.
The Blue Devil defense stepped and stopped Bruce on a big fourth down play. after the Trojans faked the punt unsuccessfully facing fourth and 22nd from their 38 yard line.
However the Blue Devil offense would not find traction after being flagged for five holding calls in five consecutive plays on the ensuring drive. Brandon Bounds would be forced to punt  and the Trojans  would take over at their 27 yard-line looking to even the score.
It would only take eight plays for Bruce to score their second touchdown of the night as Bruce connected for a 20 yard touchdown pass.
However the Trojans would not even the score after the extra point kick was blocked.
The Blue Devils would nurse a one-point lead with four minutes remaining in the third quarter as they prepared for their second kickoff return in the second half.
This time James Washing-ton would fumble as he struggled for yardage on the kickoff return.
Bruce would start on what proved to be their final scoring drive from only 33 yards out as they drove to the 10-yard line before the Blue Devil defense would force a fourth-and-nine play. The Trojans would kick a 27 yard-line field goal to go ahead, 16-14 with 11:52 remaining in the game.
Down for the first time in the game, Water Valley pounded out 74 yards in 11 plays capped by a five yard E.J. Bounds run to regain the lead, 20-16, with  seven minutes remaining in the game.
E.J. Bounds would connect with T.T. Person on a two point conversion and the Blue Devils were up by six points.
A penalty for a late hit by Water Valley would help the Trojans march down to the Blue Devils’ 36 yard line when the Blue Devil defense would again stand strong.
Facing third and 17, Person would provide great pass protection and force the Tro-jans to punt with just over five minutes remaining in the game.
The Blue  Devils last possession in the contest would start at their own nine yard-line. After one conversion, the visiting team would be forced to punt facing fourth and 10 from their 25 yard line.
The Trojans would then take over at their 42 yardline with 2:28 remaining in the game as fans on both sides realized this likely would be the final drive of the game. After driving to the 10 yard-line, two dropped passes by Trojan receivers would end the game as the Blue Devils took over with eight seconds left to play.

Friday Against Senatobia
Senatobia will travel to Bobby Clark stadium Friday night for Water Valley’s homecoming. Embry said the 4A school’s program has seen improvement and he expects a tough contest.
“We have been playing a lot of competitive teams. This will get us ready for district play,” Embry added.