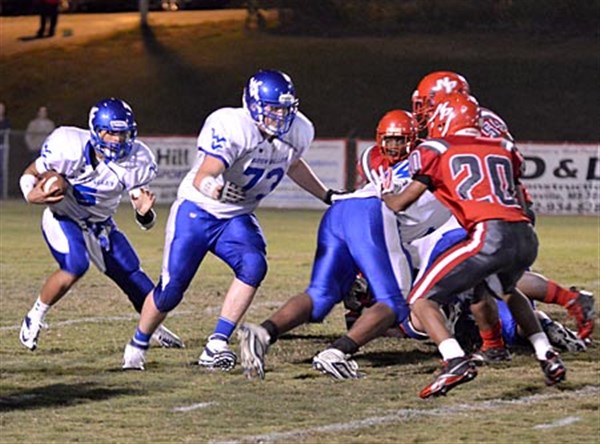 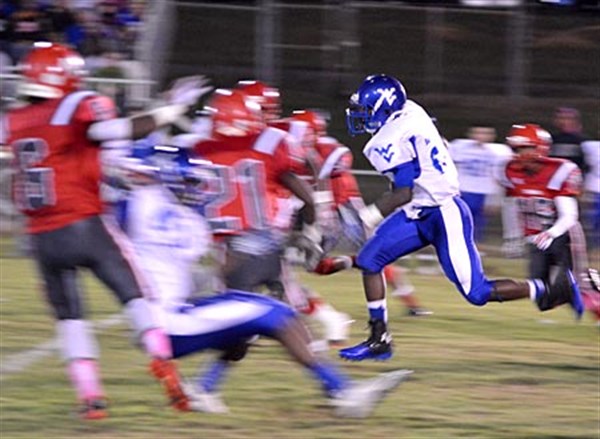 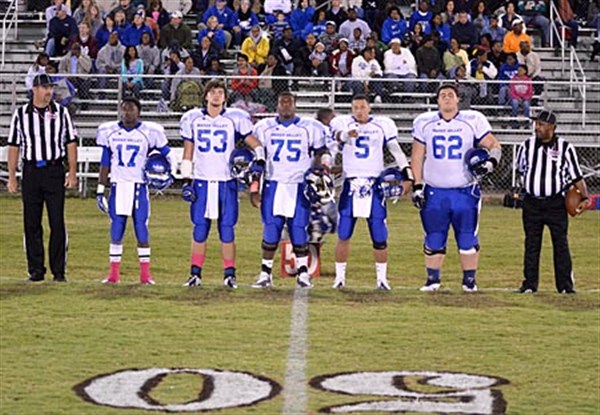 Team captains gearing up for the contest against North Panola last Friday include (from left) K.J. Lee, Mac Williams, Montez Hairston, E.J. Bounds and John Swinkowski. Water Valley has two game remaining before post-season play gets underway, Friday against Independence and an away game against M.S. Palmer in Marks. – Photo by Mark Anthony


SARDIS–The Blue Devils claimed a big region win last Friday, defeating the North Panola Cougars in Sardis 28-12.
“It was a big win in a hostile environment,” Coach Brad Embry reported. “But I felt like we had the game in control the entire time,” he added.
While in control, there were some tense moments during the night as the Blue Devils overcame another game loaded with adversity.
The adversity included some questionable calls among the 18 penalties recorded by the Blue Devils in the contest.
“Some of the calls that went against us were proven by film to be really bad calls,” Embry said. “But the kids did not panic, they kept their composure and played four quarters.”
The Cougars had the first possession of the game, but were forced to punt, going three-and-out after the Blue Devil defense backed them up four yards on the drive.
“It was lights out, defensively,” Embry said of his team’s overall effort on the night.
A costly Cougar penalty and a big punt return set up the Blue Devils with a short field on their first drive of the night. Four plays later the visiting team would score on a one-yard run by senior quarterback E.J. Bounds to take an early 7-0 lead with just two-and-a-half minutes burned off the clock.
“They tried to dictate our offensive  play to make us throw every down,” Embry said. “But we ran the ball very effectively during the night, and were also able to complete some big pass plays,” the coach said.
That first score came solely on the ground attack with a 15-yard run by junior Elijah Rogers, and a pair of quarterback keepers by E.J. Bounds for 19 yards, before the short hop across the goal line.
The Cougars would strike on their next drive with sophomore Darius Thomas snagging a 53-yard pass with one hand from senior quarterback Jatavious Farmer to narrow the Blue Devil lead to one point after the two-point conversion failed.
“North Panola is a very athletic team, they have some big-time college players,” Embry said about the effort.
After the Cougar touchdown, both offenses sputtered, swapping punts until midway through the second quarter when E.J. Bounds found junior receiver L.J. Hawkins for a 49-yard touchdown pass. Junior kicker Alex Robles punched his second extra-point attempt in the night to give his team an eight-point lead, 14-6.
The Blue Devils would capitalize on a Cougar fumble on the next drive, driving 53 yards in five plays, spurred by two  big passing plays. E.J. Bounds connected with Trey Alexander on a 37-yard pass and connected with T.T. Person on a 17 yard touchdown pass to go ahead 21-6 after Robles’ kick with just under five minutes remaining in the half.
The Cougars (5-4, 2-1) would eat up much of remainder of the half in a 47-yard drive that sputtered out at the Blue Devil’s 25 yard-line after they were unable to convert on fourth and 11.
Second Half
A strong opening drive by the Blue Devils to start the second half abruptly ended after the Cougars had an 81-yard pick six–their last score in the game. With  second failed two-point conversion the Blue Devils led 21-12.
After a series of back-and-forth punts, junior Dee McNeal would nab a fumble by Farmer to set up the Blue Devil’s next scoring opportunity.
Starting from the Cougar’s 37-yard line, the Blue Devils marched 30 yards before stalling on their 23-yard line. Veteran kicker Robles would take the field for a 42-yard attempt, a kick that was only yards short.
The Blue Devils defense would only allow 22 yards on the Cougars’ next drive, and the Blue Devils started their next drive on the Cougar’s 32-yard line following the Cougar punt.
Marching to the seven-yard line, the Blue Devils were ready to strike again when a fumble caused a turnover.
Three plays later the Cougars fumbled it back as Grant Blake recovered his second fumble in the game setting up his team on the 10-yard line. This time the Blue Devils would make good on the opportunity as E.J. Bounds would record the final touchdown, taking it in from the one-yard line for his second in the night. E.J. recorded 102 yards on the ground and completed seven of 12 passes for 145 receiving yards during the contest.
The Blue Devils registered 227 yards rushing during 48 carries in the game. Rogers picked up 107 yards, while Brandon Bounds recorded 11 yards in five carries. The action for Brandon Bounds was the first since he was side-lined with an injury mid-way through the Charleston game.
Defensively, sophomore Kirkland Horton led the statistics on tackles, wrapping up for 10 during the contest. Senior K.J. Lee recorded seven tackles, followed by junior Dee McNeal and senior Dakendrick Gooch with six each.

Senior Night Against Independence
The Blue Devils return to Bobby Clark Field Friday night to host Independence in a game that has the town buzzing.
After coaching five years as the Blue Devil defensive coordinator, Richard Russo took a head coach job in Independence to lead a team that has not recorded a win in two seasons.
Russo had been able to pick up four wins this year, giving his team confidence as they travel to Water Valley Friday.
They are well coached, fundamentally sound and have a lot of confidence right now,” Embry said about the contest.
“They have some good looking athletes, you will see when they walk out of the locker room,” Embry added.
In what could become a new rivalry, Blue Devil offensive coordinator Clint Faust will see his brother performing the same role on the opposite side of the field.
One of Russo’s first hires was Jake Faust as offensive coordinator.
But for Embry it’s only business as usual Friday approaches.
“I am focused on honoring our seniors during senior night and earning another region win,” Embry said.