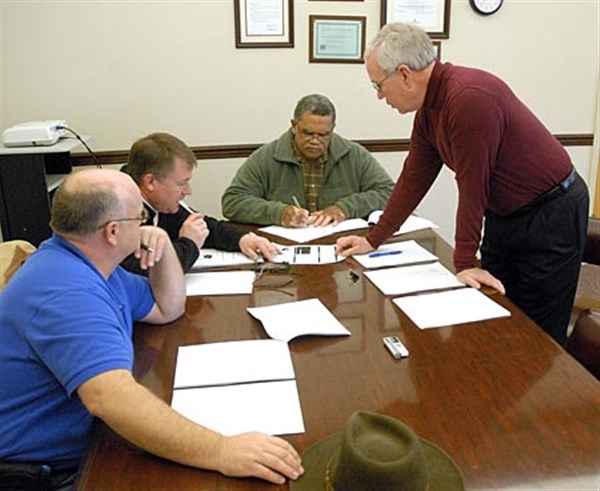 
WATER VALLEY – School board trustees approved a 30-page revised version of the district’s dropout prevention plan during a special called meeting of the board Monday at noon.
Superintendent Kim Chrestman told board members that all districts with graduation rates below 80 percent are required to get a revised plan approved. He noted that about 80 percent of the state’s school districts fall into that category. Water Valley’s graduation rate is 64 percent, which he described as being “about in the middle.”
Chrestman explained that the graduation rate is based on the “ninth grade cohort group,” which is the number of students who enter the ninth grade minus those who drop out over the four high school years.
The superintendent gave as an example of the problem faced by the district, one student who enrolled, went to school for one day and then left. The child has never enrolled in another school district, so he will be counted against Water Valley as a dropout.
And, he is not the only one, Chrestman added and described the same scenario for several others who enrolled and then moved out of state. “They never officially withdrew,” he said, “and we don’t know where they are.”
Trustee Pierce Epes asked what the graduation rate would be if those factors were eliminated and Chrestman answered that it is about 79 percent.
“This is probably doing more harm to our academic ratings than anything else,” Trustee Taylor Trusty noted.
As the discussion continued, the superintendent read a question that district officials were required to answer from a planning template provided by the State Department of Education: “Are teachers encouraging students to care about education while focusing on connecting the relevancy to their lives?”
Another question asked: “Are your middle schools organized to engage middle grade students and meet their need for adventure and camaraderie?”
Board President Lamar Burgess asked how far were students from graduation when they dropped out. Chrestman answered, “All ranges.” But, he added that some were within just weeks of getting their diploma.
He said they had passed all the testing; all they had to do was be present. “We couldn’t get them to come to school.”
After additional discussion, trustees approved the revised dropout prevention plan.
Trustees also accepted a recommendation that a make-up day for Nov. 15 be set for April 21. Visitation for Dr. Carol Gary was held on Nov. 15 and local schools were closed.
The next meeting of the school board is scheduled for Jan. 27 beginning at 6:30 p.m. in the conference room of the district office building on Market Street.