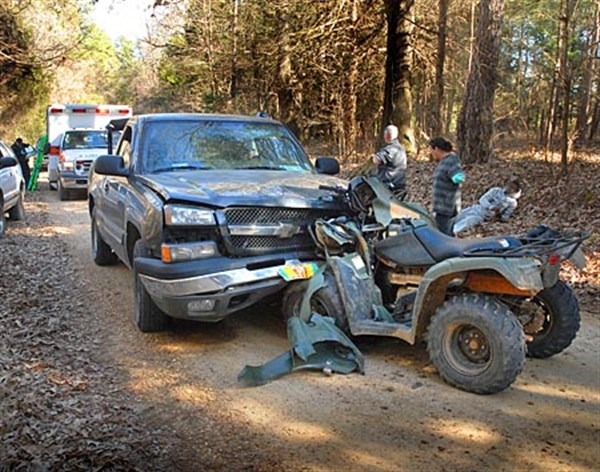 Three juveniles dodged serious injuries when the four-wheeler they were riding crashed into a pick-up truck on County Road 124 just off Hwy. 32 between Water Valley and the Pine Valley Community Monday. Emergency responders called for three medical helicopters to airlift the youngsters to the MED. – Photos by Jack Gurner 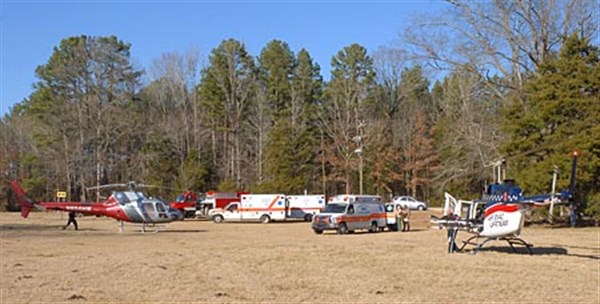 A landing zone was set up in a field adjacent to Pine Valley Fire Department on Hwy. 32 as paramedics stabilized the three injured juveniles for transport. 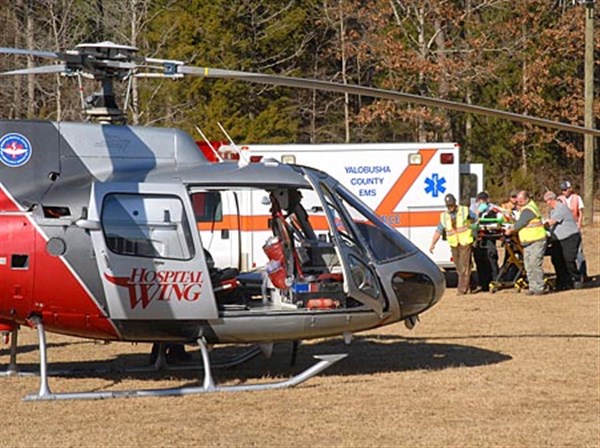 A number of first responders from across the county joined paramedics at Monday’s accident involving an ATV and truck. Three ambulances from Yalobusha General Hospital were used to transport the injured parties to a nearby land site where they could be transported to the Regional Medical Center in Memphis.


PINE VALLEY – Three juveniles were flown to the Med in Memphis after sustaining injuries in an accident Monday afternoon just before 1:30.
Sheriff Lance Humphreys reported all three were traveling on County Road 124 on a four-wheeler when they struck a pickup truck head-on.
Emergency responders were on the scene within minutes and immediately requested helicopters because the victims were unconscious. Both on-duty ambulances from Yalobusha General Hospital were called to the scene along with a third normally held in reserve.
The ambulances transported the victims to a landing zone set up in a field adjacent to the Pine Valley Fire Department on Hwy. 32 where two helicopters from Wings and one from Air Evac Lifeteam landed.
At press time Tuesday, Sheriff Humphreys reported that one of the young victims had been released. The two others were being held for observation.
“They were lucky, it could have been a lot worse,” Humphreys said.
The driver of the pickup was not injured.
Sheriff Humphreys also reported that on Saturday deputies stopped a blue GMC pick-up truck for careless driving and improper equipment near the Hwy. 51 and 32 intersection.
Deputies detected the strong smell of intoxicating beverage and the driver, Devin McCammon, 31 of Calhoun County, consented to a search, the sheriff said. “Deputies found a clear plastic bag with a crystal-like substance. They did a field test and it tested positive for some type of methamphetamine.”
McCammon was arrested for DUI, possession of meth and the vehicle was towed to the sheriff’s department to await seizure and forfeiture.
Among other law enforcement actions over the weekend, deputies:
• responded to a disturbance of the family on County Road 432 on Friday.
• arrested a trespasser on County Road 224 on Sunday.
• charged Jatarus Phillips with domestic assault after an incident on County road 235 on Sunday.